Situated on the outskirts of the village of Munlochy, the farm has rich ground surrounding the beautiful bay adjoining the Moray Firth. Modern processing facilities for seed potatoes and cereal crops are located at the main steading and can be accessed from the B9161 (suitable for heavy goods vehicles).

Clearing some of the dead wood at the farm...

Latest progress of the new shed at Munlochy Mains. Now that we've finished the overall harvest we can focus on getting a few things sorted around the steading. We're looking forward to getting everything finished in the next few weeks, just in preparation for dressing beginning.

Potato Harvest 2021 finished yesterday, the earliest for a number of years. Makes a real difference when you have a great team, good weather and forgiving ground conditions. All the crops off the fields, away to sale or into cold storage - one less thing to concern ourselves with. Focus now moves to the changes we're making at the steading and to getting ready for seed dressing.

We have pallets and cut wood available at the farm. Most has been stored (boxed) outside (under makeshift cover) but we're needing the space again. Approximately 60 boxes and an abundance of pallets too. Drop us a message if you're interested in either.

Latest photos of the progress of the shed. Took MJL Construction (Scotland) Ltd 5 days to get to this stage. Some materials outstanding for progressing further but we hope to be in receipt of them within the next two weeks.

First day of erecting the new shed at Munlochy. Hopefully get some of the rafters up tomorrow before the weather turns. #shufflebottom

First deliveries of steel arrived in the recent days. Erection should commence on Monday of next week. #shufflebottom

A quick thanks to Blake Geoservices Ltd for coming out to the farm yesterday and completing a compaction test of the fill for the new storage shed foundations. The purpose of this test was to allow us to check that the compacted material meets the minimum foundation bearing load of 80kN/m2 (approximately 8 tonnes per square metre). Quick and professional service from the guys. 👍🚜

A quick drone clip from the past weekend. Craig busy doing the spring ground works.

Finally got around to uploading a webpage to the domain we've held for nearly nine years. All it took was a global pandemic and some snow. It's a work in progress but it covers the bare essentials for what's needed: what we do, where we are, and how to get in contact with us. We're working on e-mailing tatties next... http://www.hdpaulandsons.co.uk/

While the detail is yet to be published, it's non the less concerning news coming from the EU trade negotiations. We have orders for clients outwith the union, but it will potentially impact the market values of this world-class Scottish export...

Sector, worth £112m annually to Scotland, not included in food exports allowed to continue to EU

With 2020 highlighting the importance of being able to store harvested crops efficiently on site, we thought our wooden grain transfer system was in need of an upgrade. Clark & Sutherland fabricated and installed a new grain conveyor to allow us to fill our existing bins, but also, new to us, fill directly into waiting trailers. Thankfully we've eventually moved all our grain this year but we've had to rely on our friendly neighbours to offer up storage while we took in the potato harvest. Thanks to everyone who helped.🥔👍#clarkandsutherland #grainconveyor #blackisle #hdpaulandsons #harvest2020 #farmlife #farmingforscotland

Gald to say that we finished our 2020 Potato 🥔🚜 harvest yesterday, however, we've some food for thought when it comes to the future of the sector and how we deal with the combined challenges from COVID-19 & Brexit: https://www.bbc.co.uk/news/uk-scotland-54544842

Trying to see eye-to-eye on potatoes

Cereal harvest finished for another year! 🎉 We started 🥔 harvest last week and have managed to start that rolling in. Storage is the main constraint as we have about 450+ tonnes of spring barley sat awaiting lorries. 🚛 Time to winter prep the combine for storage.

Photos of the 🌾 harvest over the past few days. Mixed weather conditions but fortunate with grain yield and quality. 👍

First day of the the 2020 harvest for us. Hope the weather will hold for a few days to allow us to open up the crops. 🌾

This occurred at the entrance to the junction up to Tore Mains. What it doesn't mention is that the driver saw fit, for whatever reason, to torch the car after he crashed it. Thankfully no-one from either Tore Mains, or ourselves, was in the vicinity at the time (we had been earlier in the day topping potatoes). If anyone might have dashcam or CCTV footage of the described car/person then please contact the below.

About 8pm hours on Wednesday 12 August 2020, a one vehicle road traffic collision occurred on the A832, at the entrance to Teanahuig Wood, by Tore. Police are looking to trace the male driver of the vehicle, a green Volkswagen Golf registration number RF03WCN, who fled the scene and was last seen abround 9.15pm on the B9161 at Bogallan, walking in the direction of the A9.
It is suspected that he may have been picked up by a passing motorist.
This male is believed to be white, 25-30 years of age, slim build and had short dark hair. He is thought to have been wearing a dark coloured T Shirt and dark coloured tracksuit bottoms.
We are appealing to anyone who may have seen or interacted with this male to contact police Scotland on 101 quoting ref 4120 of 12th August.

Some quick photos of the 🥔 planting underway...

One of those less favoured tasks, but Robert is a whizz at changing the wheels now. Preparation for 🥔 planting 2020 is progressing well. 👍

What a difference a month makes. We finished sowing our cereal crops for 2020 yesterday after the ground finally dried out. Here is a photo of Robert doing what he does best, locating the wettest parts of the field! 🤣This was taken on the 27th of March. Now onto potato planting...

Potato harvest 2019 finished! Thanks to everyone who helped. That brings to a close all our harvesting for the year and now the focus switches to 2020 planning.

Some more photos of the guys harvesting at Redhill. Thanks to Craig Nicol for the photos. (y)

Thanks to Callum Maciver for sending us a photo of the guys harvesting potatoes at Redhill today. (y)

Happy to say that we finished our somewhat stop/start 2019 cereal harvest on Saturday evening. Thank you to the Campbell clan (Stuart & Mackenzie) for helping us lift our field of flat oats at a frustratingly slow, but necessary, pace. We started our potato harvest on Friday and, fingers crossed, hope to get a more consistent run on it over the coming weeks. (y)

Following on from last weeks post regarding old boxes and pallets for sale, we've also got cut seasoned wood for sale. A mixture of woods which have been cut and stored over the past couple of years, mainly from clearing field boundaries, waterways and gateways. We're looking for £100 for a box of cut wood. Collection preferred, as we currently don't have a small trailer, but we are open to discussing requirements. If you wish, pay us another £10 and you can keep the tattie box that it's in as well. All in the interest of clearing a bit more storage space. Around 80 to 100 boxes of wood.

Hello folks. We've some old wooden pallets and tattie boxes for sale if anyone is interested? Looking for £10 per box (around 100 available) and £5 per pallet (around 60 available). Varying degrees of condition so first come first serve. Collection from Munlochy Mains. (y)

Normally someone will be in the vicinity if a delivery or collecting is required. Contact details can be found on signage at the steading if no-one is available at the time. Mobiles may not have signal in some areas so please leave a message and we'll get back to you as soon as possible.

Be the first to know and let us send you an email when H.D. Paul & Sons Ltd posts news and promotions. Your email address will not be used for any other purpose, and you can unsubscribe at any time. 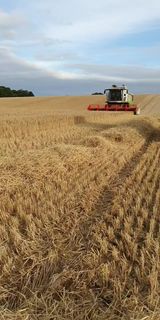 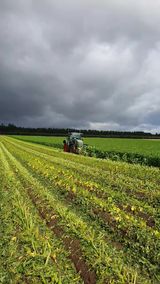 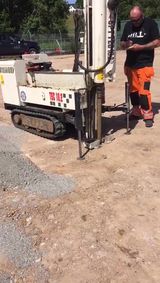 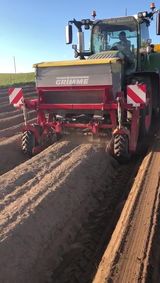 A blast from my past! Good to see Munlochy doing well!
George was delighted when the boys informed him planting must be finished as they had run out of seed.........