We have a large selection of live bait; including multiple sizes of Shiners, Fat heads, Goldfish, Crickets and worms. We also sell minnows by the pound & can pack in oxygen.

Check out this monster shellcracker caught out of Smith Lake ! It’s that time of year that bluegill and shellcracker bed. We have what you need to catch these feisty fish here at The Shiner Shack !

This is a benefit tournament for a young man’s family. He was killed at a racetrack in Northeast Alabama.

Two Shiner Shack OG’s Krymson and Cody with a couple of fish they caught on a late afternoon fishing trip with their Pop’s.

Just a word to our Shiner Shack Patrons. We appreciate every purchase that you make at our establishment. Unfortunately at times a fishing rod or reel will malfunction or in some cases break. This is out of our control. If you purchase a rod or reel from us, and it malfunctions or breaks, if the manufacturer provides a warranty you will have to exchange it or be reimbursed from the manufacturer. We carry names like Lews, Boyd Duckett and Abu Garcia, you should have no problem with a replacement. With this being said, if something like this occurs make sure you have your receipt and go to the manufacturers website for instructions. We try to be courteous and kind to all of our customers, and we would appreciate the same treatment of our employees. We do understand your frustrations when things like this occur.  Our employees have no control over breakage or malfunction of the fishing equipment, so please don’t take your anger or frustrations out on them.  Again we appreciate your business.

Cody Belcher with a nice catch and release of a nice crappie.

Josh Mcalpine with his first Hybrid Stripe taken below Guntersville Dam. Josh was using a Foley Spoon when he caught his Hybrid. Josh was fishing with Shiner Shack team members Cody, Justin and Jay Belcher.Come on in to the Shiner Shack before your next fishing trip.

We have restocked with Skipjack ! All you catfishermen come on in ! They go quick !

The Crappie Fishing has been red hot at Guntersville ! Austin Campbell has been putting a hurting on these slabs ! Come in to the Shiner Shack and get geared up for a trip to the Big G ! We packed minnows in oxygen for the trip. Tight Lines !

Cody Belcher, a Team Shiner Shack OG has been putting the smack down on both largemouth and spotted bass lately. Strike King spinner baits and Zoom Flukes have put them in the livewell for Cody. Come see us at the Shiner Shack. We just received a new tackle shipment !

Don’t be cranky, come into the Shiner Shack and gear up for your next fishing trip.

The crappie bite is still on ! With dingy water in many places, concentrate on areas where there is an influx of clear water. Jigs in chartreuse, orange and pink are effective in off color water. Also consider using an underspin jig head like a Roadrunner or a Mini Rat-L-Trap when water conditions are dingy or muddy. The vibration helps crappie key in on your bait.
Stop by and see us at The Shiner Shack for all your fishing needs. Tight Lines !

Fishing puts a smile on your face.

Be the first to know and let us send you an email when Shiner Shack posts news and promotions. Your email address will not be used for any other purpose, and you can unsubscribe at any time.

Send a message to Shiner Shack: 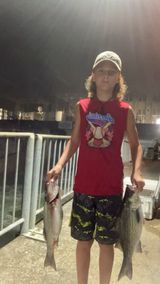 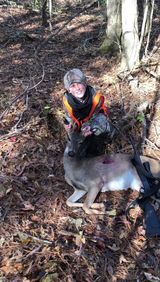 One of the original Team Shiner Shack members Cody Belcher put meat in the freezer during the Alabama Youth Hunt. Cody made a 120 yard shot with his CVA .243 to take this spike. Good shooting Big Man. 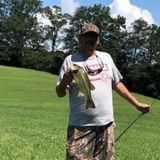 Team Shiner Shack welcomes two new members to the family,Greg and Carter Hendon. Greg and Carter fished with one of the Original Team members Jay Belcher. They had a good day chasing bass. 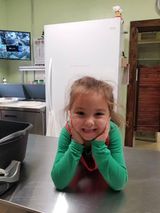 Krymson says, Come on into the Garden City Standard/Shiner Shack and order a fantastic pizza from her Uncle Kyle!!!

It’s just a cheap lifetime tamarack but suited me good. I had taken the original seat out and had a cloth covered stadium seat. It was red and blue. The original rod holder was gone. Also a garmin striker 4 cv. With an ammo box for the battery. If anyone sees it just please pm me. I’d appreciate it.
Hey guys and gals. I made a stupid decision. I went to 8 mile creek off Eva Road a couple weeks ago. After fishing I messed my knee up bad. I couldn’t get my kayak back up the bank. I have no family of really know anyone in the area to ask for help. I couldn’t get it up the bank so I left it. I’ve left it a couple days before with no problem. But my knee is better and I receded to go fish today and bring it home. Well,my kayak,fish finder and paddle were gone. I had left 4 rods that were still there. My PFD were still there. But the rest was gone. I’m not asking anyone to confront anyone if they see it. But I’d like to know so I know where to look. I’ll post some photos below this.
Shell cracker and gills are starting. Caught close to 80 in a little over an hour. Only kept a few for dinner. They were nailing any color Charlie Brewer slider about 18 inches under a float on a medium retrieve. Pinched a couple rings off the slider and had better luck hooking up.
Was jigging Lilly pads with a June bug/chartreuse slider. Had been catching a few gills when this guy decided he wanted a bite. One thing I love about those sliders,you might catch anything. Thanks guys for getting them. Also got me a couple boxes of the red worms and caught several gills and shell cracker with them.Not a hog but still a lot of fun on lite tackle.
Cold weather is coming ! We have propane ! And kerosene ! Come see us !
Grabbed some Tuffies this morning for a scout troop fishing event at my pond today, and out of 1lb of them we only had 2 floaters all day..........Boys fished for over 6 hours, and caught yearling bass all day, and then we released the luck ones into the pond to have a fighting chance.......:D
Do you have any of these guys in your store? 6 SEGMENT WOBBLER LURE