The 70 year old breeder Thierry Degraeve, who bred one of worlds famous stallions, 'Cornet Obolensky, has decided to retire. The breeder announced his retirement during the Elite Auction last weekend in Belgium's Azelhof. During the auction the ...

Loved getting this in the mail last week! Fuerst Apollo LL on his way to a tri color in the 3'3" Performance at the Skidmore Classic Horse Show. Love my boy. Thank you Diane Halpin for breeding the perfect AO show horse...

Laurel Leaf Farm and Diane Halpin congratulate Daphne Powell Markcrow and Fuerst Apollo on their great finishes today, including a first, second, fourth, and sixth in the Adult Eq and Adult Hunters at HITS Ocala! Super!

Nice photo of '08 homebred Landkaptain LL, sent by the Gradner family who own "Kappy". He is by Landkoenig out of Kleopatra R by Kalypso. 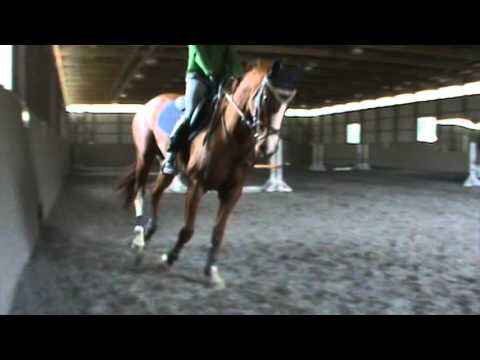 Laurel Leaf Hanoverian's homebred 2009 mare For Kicks LL by For Play out of Kleopatra R/Kalypso schooling a bounce fence with owner/trainer Erik Kraft who bought her unstarted at two years old.

Owner/trainer Erik jumping Laurel Leaf Hanoverians' 2009 homebred For Kicks LL today. "Kali" is by For Play out of my Kleopatra R. Erik has owned her since she was two.

TBT (Throw Back Tuesday (!)) Charlie Brown and Fanfare at Warrenton a few years ago. Loved this c**t. 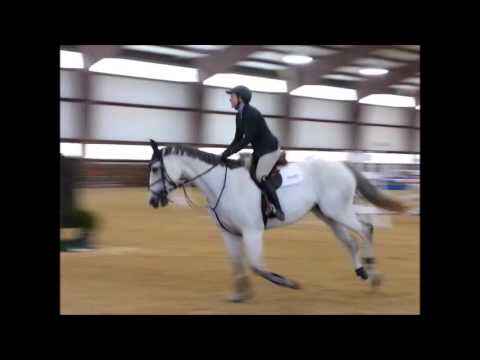 EM Fuerst Aphrodites R by Fuerst Gotthard out of my Kleopatra R was my first Hanoverian, bought as a foal from the Schuttes. I soon bought her dam back in foal to Fuerst Gotthard which produced the winning show hunter Fuerst Apollo LL. I sold "Fiona" (Fuerst Aphrodite) to a friend after her inspection and MPT when she won the free jumping with very good scores. Fiona has since produced the show jumper Almanac by As di Volare, and is still going strong herself at 11. She's a very careful and elegant jumper.

Lauren Seitz handled Diane Halpin's Llangollyn LL for a win in the 2yo filly class.

Geronimo SCF by Veron/Quite Easy out of Elite Pref. Marie Louse by Silvio 1 was 3rd yesterday in his first Young Event Horse and qualified for the finals at Fair Hill next month! Thanks, TIk, for developing him and competing him so well. G was just started under saddle in January at 4 years old so his 4th year has been full, wonderful, and the tests wide-spaced!

Chronicle of the Horse 9-21 article on the 2015 Sallie B. Wheeler U.S. Hunter Breeding Championships East and West. We are all so proud of Solaris EMF and how well he showed for owner Kenny Wheeler/Cismont Manor Farm.

Homebred For Kicks LL by For Play out of Kleopatra R/Kalypso, with long-time owner and young horse starter Erik today.

Solaris EMF at Devon last May, one first, one second, one Res. BYH. Two weeks ago, he was named Overall Grand Champion of the Sallie B. Wheeler U.S. Hunter Breeding Championships, probably the highlight of my Hanoverian program and I didn't breed him and he is owned by Cismont Manor Farm, but I enjoyed owning him in between his foaling and his sale to Kenny Wheeler! Bred by Kris Wilhelm Schuler of Edgewood Meadow Farm by Sir Wanabi out of Kris's EM Panache EMF by Pablo.

I bought Solaris EMF from friend and fellow breeder Kris Schuler of Edgewood Meadows Farm at two weeks old, shortly after losing his half-sibling also by Sir Wanabi, my filly Stirling, who was put down after an accident. Her loss broke my heart. Solaris was out of Kris's EM Panache by Pablo so half-sibling to my Palomar '08, another home-bred that I loved. I'd shown Mr. Wheeler a photo of Solaris at the c**t's AHS inspection during the '14 Warrenton Horse Show. Mr. Wheeler called last winter and asked if he could see Solaris, liked him very much, and offered to buy him. I wouldn't have sold Solaris to many people but felt that Mr. Wheeler would give him every chance to succeed in the show ring which is exactly what happened. The Sallie B. Wheeler US Hunter Breeding Championships was Solaris' third show, having been BYH in May at Keswick, Res. Ch. Pennsylvania-Bred at Devon, and winning his Pa-bred class there.

Tik Maynard and Geronimo were recently 2nd of 23 entries in OBN at Millbrook HT, finishing on his dressage score of 21! This was Geronimo's third horse trials and, to date, he has no cross-country or show jumping penalties.

Daphne and Fuerst Apollo LL, 07 gelding and a homebred for me, was CH Adult Am Equitation and Res CH Adult Am Hunters this week at Manchester and the Mountains Horse Show (Vermont) this past weekend. They've been winning all season! And my own Geronimo was 2nd in his third competition in the OBN division at Millbrook Horse Trials this past week with Tik. They've been clean XC and show jumping in all three of his first horse trials, placing 4th, then 3rd, then 2nd. Dressage score of 21 at Millbrook! Bred by Sporting Chance Farm by Veron/Quite Easy out of Marie Louise (elite preferant) by Silvio I.

Thank you, Tik, for bringing Geronimo SCF in with 3rd place at just his second competition, and happily totally clean in show jumping and cross-country! I followed the live scoring from our cottage at Wrightsville Beach. Whoopee!

Okay, then! Laurel Leaf homebred Fuerst Apollo LL, eight and whom I've had nothing to do with since he was two, was Champion ridden by Robert Braswell for owner Daphne Markcrow who has also been a tri-color winner on Apollo this year. Today, he won a 41 entry Low Hunter and was 2nd in the next, Champion of the division. Fuerst Apollo LL is by Fuerst Gotthard and out of my just-retired-but-mother-of-eight broodmare Kleopatra R by Kalypso.

Celebrity, 2015 filly by Coeur d'Amour out of Annika by Furst Impression, at her July 7 GOV inspection at High Point Farm, Chestertown, Maryland where she was awarded Premium.

Celebrity, my filly by Coeur d'Amour, bred by High Point Hanoverians, will go to GOV inspection on Tuesday, July 7.

Geronimo finishes his first horse trials in 4th place of 15 in his OBN division, finishing on his good dressage score! He was started by Tik Maynard in January and will compete with Tik and hope to scale the eventing ranks before possibly going into show jumping when he's older and has had fun eventing.

With Ann's and Parker's (Irish Sport Horse) company, Elcalina and I had a super ride down toward the Potomac through Southdown, mostly on the roads as the trails were deep mud in places. We rode past loud tractors, mowers, weedwhackers, beautiful new home being built, dogs, etc. and through the woods. I rode home without Ann and Parker. Lina was good and a lot of fun. Even afraid of the tractor pushing gravel, she went forward and didn't turn back or try to leave! Proud of her. Generally a relaxed ride on the buckle with a few more-on-the-bit spots. This old gal has a nice mare.

Here are some of my own photos of Solaris EMF by Sir Wanabi out of EM Panache by Pablo, bred by Kris Schuler, once owned and loved by me, now owned by Mr. Kenneth Wheeler and Cismont Manor Farm, Solaris was RES CH PA-BRED today, winning his PA BRED class and was second in his Regular HB Class. He showed a lot of poise and looked amazing! Kris and I enjoyed watching him today at Devon.

With the winner of each of the three age groups for Cismont Manor Farm, Solaris EMF who won his yearling class and was Best Yearling, also went BYH. Solaris was bred by Kris Schuler of Fleetwood, PA out of EM Panache/Pablo and Solaris was sired by Sandra Laprise's Sir Wanabi. I bought Solaris from Kris when he was about a month old and sold him to Mr. Wheeler when he was 11 months old. I loved him and enjoyed him tremendously during the short time he was with me and I'm so proud of him today!

Tik Maynard schooling Geronimo through the water a few days ago. G has schooled most XC fences now in small form and Tik has brought him along beautifully since starting him under saddle in January. Geronimo is a 4 yr old KWPN gelding by Veron out of Elite Pref. Marie Louise by Silvio I, bred by Karin Jimenez of Sporting Chance Farm and purchased by me at 2 years, starting ground training with Klaus Schengber for 8 months, then started under saddle in January, then later over fences by Tik Maynard.

Mike on Artex (Riverman/Idocus) at an eventing clinic in Southern Pines. Artie is a Laurel Leaf Farm grad, KWPN, and started by Jake Nodar, and the Fragola family have loved and developed him for several years now.

Laurel Leaf Hanoverians has added the six year old gray mare Elcalina by El Bundy and out of Chanel by Calido I to our broodmare band (now numbering two) and performance horse group (of two). She's a lovely girl and I thank Caliburn Farm for the opportunity to own her.

Diane Halpin and Laurel Leaf Hanoverians thank the Barilar family and Klaus Schengber of High Point Hanoverians for allowing us to purchase the 2015 Coeur d'Amour filly "Celebrity" (born Oscar night) out of Annika by Fuerst Impression. This very beautiful, people-oriented, calm and intelligent young lady caught my eye at the Hanoverian Breeders Seminar 2015 and will help make up the play group here in nursery school after weaning with my foal by Sir Wanabi out of Kleopatra. Could Celebrity have dressage in her future or prefer to pursue a hunter breeding then show hunter career? Stay tuned. I'm sure she will let us know!

Be the first to know and let us send you an email when Laurel Leaf Hanoverians posts news and promotions. Your email address will not be used for any other purpose, and you can unsubscribe at any time.

For Kicks LL at 2011 Upperville

Other Farms in Great Falls

Other Farms in Great Falls (show all)