Stanton Milling (a division of Hepler's Town & Country Enterprises) is a Pennsylvania business that has been offering milled flour products for 165 years.

Our specialty: Self-Rising Buckwheat Pancake Mix. Stanton Milling (a division of Hepler's Town & Country Enterprises, Inc. since 1942) is a Pennsylvania business that has been offering milled flour products for 165 years. The original mill located in the town of New Stanton, PA was operated by the Painter family initially, later the Stanton family, and presently the Hepler family for 75 years. Th

Our specialty: Self-Rising Buckwheat Pancake Mix. Stanton Milling (a division of Hepler's Town & Country Enterprises, Inc. since 1942) is a Pennsylvania business that has been offering milled flour products for 165 years. The original mill located in the town of New Stanton, PA was operated by the Painter family initially, later the Stanton family, and presently the Hepler family for 75 years. Th

Drum roll please...we've been keeping a secret for 8 months... Presenting the new design for Stanton's Own Buckwheat Pancake Mix - it's here! Special thanks to our graphic designers for their vision! We love it, and think it will 'sell like hotcakes'! 😉 🥞 Though we don't know the exact birthdate of this recipe, we know James Stanton was involved in Paintersville aka Stanton Mill since 1892, and he passed away in 1934 (Hepler's bought the mill business around 1947). We believe the recipe has been around since the 1920s - about 100 years. We're so proud to be the purveyors of this SW Pennsylvania product! It is hitting the shelves of stores in PA, WV, and beyond as we speak! Find us on Amazon (search Stanton's Own).
#buckwheat
#shoplocal
#stantonmilling
#laurelhighlands
#golaurelhighlands
#heplerstownandcountryentinc

Have you eaten Buckwheat cakes the old-fashioned way (yeast risen)? Drop by the Stahlstown Flax Scutching Festival today to try \
our pure buckwheat with delicious sausage! Lots of fun things to do! Open till 5pm.
#FlaxScutchingFest
#StantonMilling
#golaurelhighlands

Only 12 days till Christmas... Do you think Rudolph is ready?! 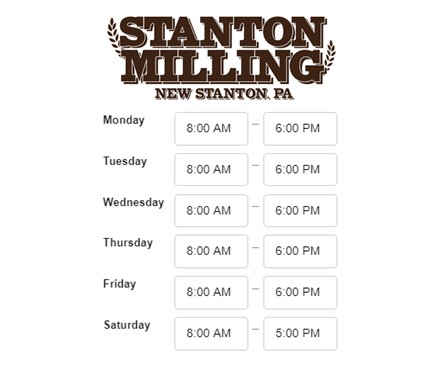 May your 2020 be healthy and happy! As we enter our 78th year as caretakers of the Stanton Milling brand and specialty products (original mill established under Israel Painter in 1853), please note our new hours (closing 6pm M-F).

Our newest business venture is open! Stanton Daily Grind will showcase, sell, and eventually serve our Stanton Milling products on the menu. The coffee shop is NOW OPEN Mon-Sat, 7am-7pm!

Stanton Milling Friends: We have big news to share... Please spread the word on the "rumor mill!"

‘Daily grind’ likely derived meaning from grist mills. An historic mill took quite a few steps to get up and running, and to reach that familiar, steady rhythmic hum. Once running, it ran continuously – a literal daily grind. Mills ran 24/7, as the weather, supply, and demand would allow. Gris...

Snow Day Breakfast - buckwheat style! Whatever the weather, it's always a perfect day for a buckwheat cake!

We’re getting ready for the Society for the Preservation of Old Mills (SPOOM) national conference in York, PA this weekend! Centerpieces sponsored by Stanton Milling.
http://www.spoommidatlantic.org/cms-view-page.php?page=chapter-fall-meeting

Mixing it up with the Pancake and Buckwheat mixes, trying our hands at homemade funnel cakes with recipes we found on www.seriouseats.com. We liked them both! http://stantonmilling.com/

Our friends at Paul Family Farms have some great gift ideas - including some of our self-rising Buckwheat Pancake Mix!

We're excited to now be partnering with Stanton Milling to provide you with a Pennsylvania Buckwheat Pancake Mix! With over a 150 years of history, it only seems fitting this is the official pancake mix of Paul Family Farms#maple #farm #farmtotable #pancake #buckwheat #breakfast #pennsylvania #eatfresh #eatlocal #shoplocal 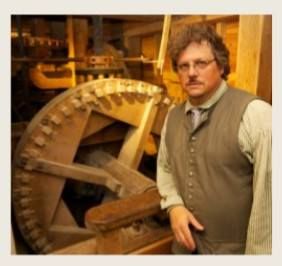 The Milling Process: Step by Step

Watch a video from inside George Washington's grist mill at Mt. Vernon. Very cool! There are great photos, and a glossary of milling terms, too. (http://www.mountvernon.org/the-estate-gardens/gristmill/)

Great News: A whole new shipment of Buckwheat Pancake Mix should be arriving today! Many don't know that this is a seasonal item. We typically receive our shipment after fall harvest, then sell out in winter/spring. But after an unexpected large order, we were able to find a winter buckwheat provider, and place a big order!

It's "Pancake Tuesday"! Eat pancakes for dinner! Some claim this as the original "National Pancake Day." Many Christians traditionally celebrated Fat Tuesday, Mardi Gras, Fastnacht Day, or Shrove Tuesday (47 days before Easter). This was the day before Lent - a day to eat rich, fatty foods before the period of fasting began. Pancakes were often made with eggs, milk, and sugar - things to be avoided during fasting. So they ate them up the day before Lent by making pancakes!

Now here's a chocolaty idea for your sweetheart - some Stanton Milling pancakes with Nutella in the middle. :)

Start your cold winter day with a hot buckwheat cake! Compared to our competitors, our buckwheat mix is darker, richer, and easier to make (just add water!) [Pictured below: Stanton Milling on the left, competitor on the right.]

50+ Years Flipping Flapjacks for Fundraisers:
Troop #457 to Host Pancake/Buckwheat & Sausage Breakfast!
New Stanton, PA – On Saturday, January 31, 2015, Boy Scout Troop # 457 will host its annual Pancake/Buckwheat and Sausage Breakfast fundraiser at the New Stanton Fire Hall from 7:00 a.m. – 12:00 p.m. The cost for this all-you-can-eat event is $7.00 for adults, and $3.00 for children ages 6-12. Children ages 5 and under can eat for free! The New Stanton Fire Department is located at 108 South Main Street in New Stanton, Pennsylvania, 15672.

This breakfast is an annual tradition. Stanton Milling, which originated in the old grist mill on Sewickley Creek in the village of New Stanton, donates the pancake and self-rising buckwheat pancake mix for the flapjacks each year. Troop leaders and Boy Scouts rise before sun-up to heat up the griddle, help prepare the food, and serve an average of 600 people roughly 1,500 flapjacks. “Funds raised at this breakfast will help approximately 20 Scouts go to summer camp at Camp Conestoga,” said Scout Master Charles Stack.

Though Troop #457 has been active for 40 years, this tradition of supporting Boy Scout pancake breakfasts has been going on for more than 50 years. “Our family acquired Stanton Milling from the Stanton Family in 1947,” said Rob Hepler, “and for as long as I have been involved with Scouting, since the mid-1950s, we’ve been donating the pancake products for these breakfasts.”

Hungry breakfast-goers can put their money where their mouths are, so-to-speak. And at the same time, they can taste something very unique and native to New Stanton: Self-rising buckwheat pancakes. Many think that buckwheat is a grain. However, it does not grow like typical grassy grain plants (think wheat). It is more like a fruit, and in fact is related to the rhubarb plant. Buckwheat plants produce seeds which are eaten or ground into a dark, grainy-like flour. Traditionally, buckwheat pancake yeast mix had to raise overnight. But Stanton’s hearty, dark-grain pancakes are special, as they may have been the first mix created in the late 1800s to which you only had to add water. No yeast, buttermilk, eggs, or oil.

Best of all, no reservations are necessary for the Saturday morning breakfast. Simply come as you are: Bed-head, pajamas, hard-hat, snow boots, or coat and tie. Just come hungry.

Be the first to know and let us send you an email when Stanton Milling posts news and promotions. Your email address will not be used for any other purpose, and you can unsubscribe at any time.

Send a message to Stanton Milling:

Growing up in Morgantown WVA, we had buckwheat cakes and sausage alot for breakfast. We were in the military for30 years and we had family mail us the buckwheat flour where ever we were at. Family was always sending us some. Even in Germany and Hawaii, and Korea when my husband was stationed there. A few years ago I started getting it again by mail. But that company is no longer in business. I am hoping that I can get some through your company. Please let me hear from you. I did call a number but got a message they would call me back in a few days. I am waiting for that call. Thanks !!!!!!!!!!