Not feeling great but green ginger tea and cough drops help! We have things to get done! ❤️ 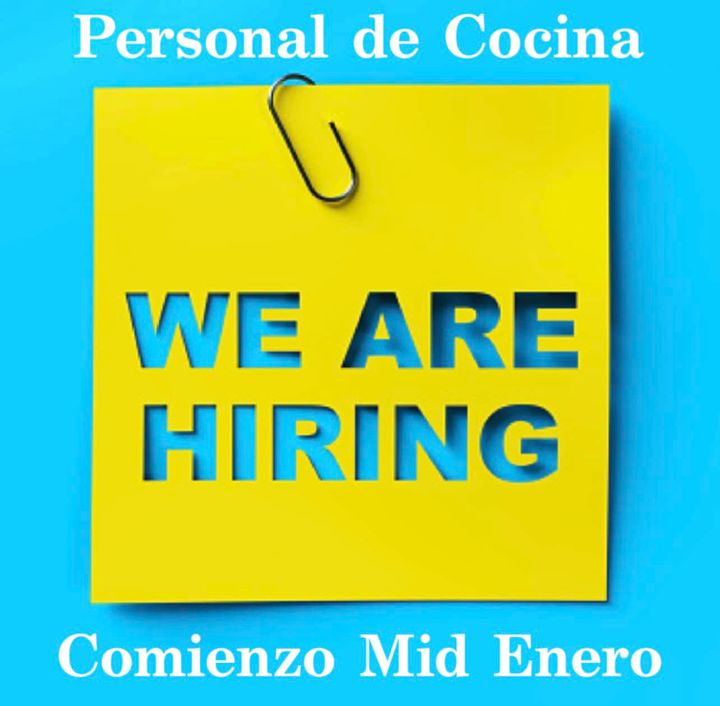 You saw it here FIRST….
Birria Pozole!! 😱 and it was amazing!
Stay tuned for Birria Tamales 😍 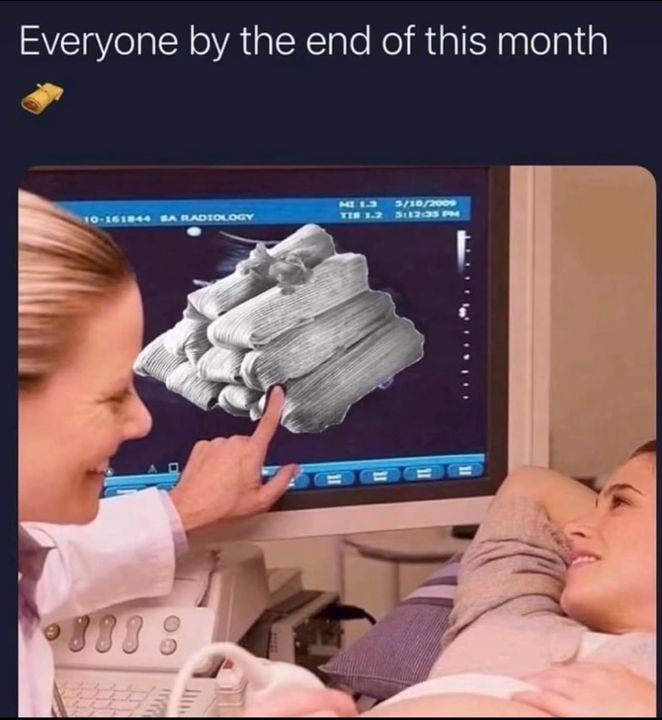 Guess who got their Birria Quesadillas?! 😆
I waited until after dinner hours to post so don’t be mad at me for taunting! 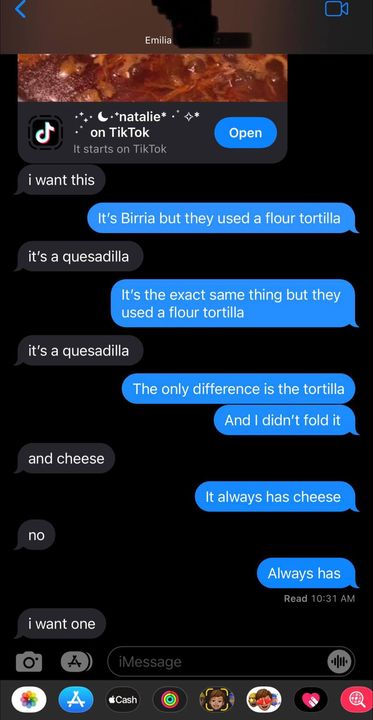 Is my child really trying to argue with ME over how to make her favorite food, queso birria tacos?! 😳
The nerve! 😆
I think she’s just instigating me so I’ll make them for her tonight.

On Mexicans, Anthony Bourdain wrote this:

Despite our ridiculously hypocritical attitudes towards immigration, we demand that Mexicans cook a large percentage of the food we eat, grow the ingredients we need to make that food, clean our houses, mow our lawns, wash our dishes, and look after our children.

As any chef will tell you, our entire service economy—the restaurant business as we know it—in most American cities, would collapse overnight without Mexican workers. Some, of course, like to claim that Mexicans are “stealing American jobs.”

But in two decades as a chef and employer, I never had ONE American kid walk in my door and apply for a dishwashing job, a porter’s position—or even a job as a prep cook. Mexicans do much of the work in this country that Americans, probably, simply won’t do.

We love Mexican drugs. Maybe not you personally, but “we”, as a nation, certainly consume titanic amounts of them—and go to extraordinary lengths and expense to acquire them. We love Mexican music, Mexican beaches, Mexican architecture, interior design, Mexican films.

So, why don’t we love Mexico?

We throw up our hands and shrug at what happens and what is happening just across the border. Maybe we are embarrassed. Mexico, after all, has always been there for us, to service our darkest needs and desires.

Whether it’s dress up like fools and get passed-out drunk and sunburned on spring break in Cancun, throw pesos at st*****rs in Tijuana, or get toasted on Mexican drugs, we are seldom on our best behavior in Mexico. They have seen many of us at our worst. They know our darkest desires.

The effect on our society is everywhere to be seen. Whether it’s kids nodding off and overdosing in small town Vermont, gang violence in L.A., burned out neighborhoods in Detroit—it’s there to see.

What we don’t see, however, haven’t really noticed, and don’t seem to much care about, is the 80,000 dead in Mexico, just in the past few years—mostly innocent victims. Eighty thousand families who’ve been touched directly by the so-called “War On Drugs”.

Mexico. Our brother from another mother. A country, with whom, like it or not, we are inexorably, deeply involved, in a close but often uncomfortable embrace.

Its archeological sites—the remnants of great empires, unrivaled anywhere. And as much as we think we know and love it, we have barely scratched the surface of what Mexican food really is. It is NOT melted cheese over tortilla chips. It is not simple, or easy. It is not simply “bro food” at halftime.

It is in fact, old—older even than the great cuisines of Europe, and often deeply complex, refined, subtle, and sophisticated. A true mole sauce, for instance, can take DAYS to make, a balance of freshly (always fresh) ingredients painstakingly prepared by hand. It could be, should be, one of the most exciting cuisines on the planet, if we paid attention.

The old school cooks of Oaxaca make some of the more difficult and nuanced sauces in gastronomy. And some of the new generation—many of whom have trained in the kitchens of America and Europe—have returned home to take Mexican food to new and thrilling heights.

It’s a country I feel particularly attached to and grateful for. In nearly 30 years of cooking professionally, just about every time I walked into a new kitchen, it was a Mexican guy who looked after me, had my back, showed me what was what, and was there—and on the case—when the cooks like me, with backgrounds like mine, ran away to go skiing or surfing or simply flaked. I have been fortunate to track where some of those cooks come from, to go back home with them.

To small towns populated mostly by women—where in the evening, families gather at the town’s phone kiosk, waiting for calls from their husbands, sons and brothers who have left to work in our kitchens in the cities of the North.

I have been fortunate enough to see where that affinity for cooking comes from, to experience moms and grandmothers preparing many delicious things, with pride and real love, passing that food made by hand from their hands to mine.

In years of making television in Mexico, it’s one of the places we, as a crew, are happiest when the day’s work is over. We’ll gather around a street stall and order soft tacos with fresh, bright, delicious salsas, drink cold Mexican beer, sip smoky mezcals, and listen with moist eyes to sentimental songs from street musicians. We will look around and remark, for the hundredth time, what an extraordinary place this is.

Who’s ready for tacos and mezcalitas 😍🍹🙌🏾

Birria Ramen 😋 I apologize in advance for not sharing….YET!

Torrie has always had the best aprons until now! This apron is handmade by women in Guatemala and it’s my absolute fave! You can purchase one, coffee or many other items from Hands of Grace Guatemala . The money will be used to build schools, wells and benefit many families with basic needs. The founders are dear friends of mine that were at one time Hamilton County residents before uprooting their lives to live in Guatemala and do this amazing work they were called to do. Check them out!

And this quaint little air bnb we’re cooking in can be yours for a fun weekend! Located downtown Cicero and walking distance to all your favorite spots!

While we are saddened by the recent closing of Cicero Coffee Company after almost 30 years, it has opened a door for Bien Mexicana to have a Taqueria FINALLY!
I’ll keep you all updated through social media.
Food AND cocktails coming soon!

Sometimes you forget how far you’ve come because you’re always onto the next big thing. I don’t think we spend enough time congratulating ourselves on the success we’ve already had and the time and effort we’ve invested in our dreams.
The past couple years have been a blessing and a huge testament to my character during tough times, but back to the future because bigger things are coming very soon!

I’m taking tamales orders for Thanksgiving now.
Pork by the dozen only - $36
Pick up in Cicero Wednesday

Our partners at Yelp Indy are bringing back their Cultura Club again.

BIEN Mexicana in the news again 🥰
Luckily, I didn’t have to be on camera this time!
There are a few spots remaining for bilingual, sunset yoga at Saxony Beach.
RSVP at
https://indyhub.org/event/yelp-indys-cultura-club/2020-08-26/

Make sure you RSVP to our sunset, bilingual beach yoga at Saxony on August 19th @ 7pm.
Registration is only open to the first 200 people! ❤️
Free yoga session by the hot room and free BIEN food sponsored by Yelp!
Gratis!

UPDATE: Actually we’re all good!! So anyone just dying to give that food truck life a try?! 🤣 Now is your chance, I need help 10-5 tomorrow. You’ll have fun, make some money and be off before the July 4th fun begins.
Let me know 🙏🏽
Event is Urban Vines Winery.

Just two of your fave, local entrepreneurs cooking up some ideas ❤️ Mark your calendars for Saturday, July 17th Co-hosted by . You definitely don’t want to miss being a part of this collaboration! and my businesses have been very, very blessed and we’re taking opportunities to give back! Gracias a Dios 🙏🏽 Loves you and I’m excited to work with you again! torriehattaway

Schedule for the week!

Be the first to know and let us send you an email when Bien Mexicana posts news and promotions. Your email address will not be used for any other purpose, and you can unsubscribe at any time.

Send a message to Bien Mexicana: 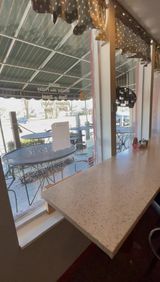 BIEN Mexicana in the news again 🥰 Luckily, I didn’t have to be on camera this time! There are a few spots remaining for bilingual, sunset yoga at Saxony Beach. RSVP at https://indyhub.org/event/yelp-indys-cultura-club/2020-08-26/ 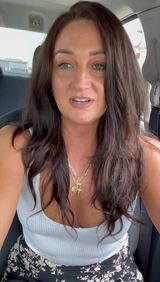 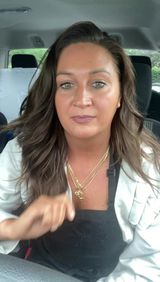 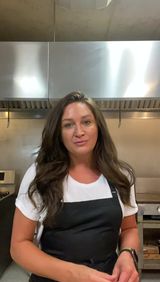 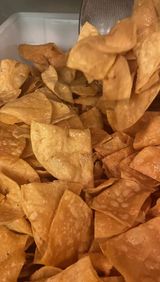 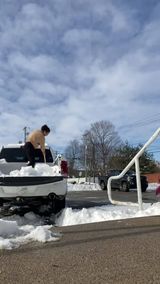 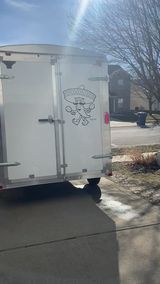 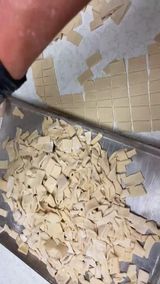 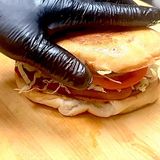 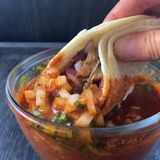 Other Food & Beverage in Noblesville

Where are you going to be this evening?? I’ve been too long without your amazing food😋🥰
📺 💃🌮 Our Cultura Club event series is back! RSVP to try a tequeno, craft a caipirinha, take bilingual beach yoga, and so much more. Thanks for the feature, FOX59 News! https://fox59.com/morning-news/yelp-creates-club-for-cultural-experiences/

Cumaco Arepa House Sazón de Panama Saxony Lake and Beach BIEN Mexicana The Hot Room - Hot Yoga Indianapolis The Hot Room - Fishers Agave Bar & Grill FogoDeChao Brazilian SteakHouse Che Chori Foods La Palapa
Where have you been???
Your food was delicious tonight as always! Thank you!!!!!
BIEN Mexicana is at the market! Their tacos and nachos are the best! Barbacoa is delicious. Make her sell out so that she can keep coming back!!!
BIEN Mexicana coming to the neighborhood on Wednesday. She’ll be at the pool for dinner!
will you be at the VFW this weekend?
BIEN Mexicana is one of the restaurant concepts currently operating out of the Fishers Test Kitchen, which provides entrepreneurial chefs with a space to test out their concept. If you haven't been to the Fishers Test Kitchen, it's a unique and innovative place to visit.
When are you back at the Test Kitchen?
BIEN Mexicana will be featured on Hoosier Taste Buds on Sunday, 02/21/21. Please feel free to promote your business, menu and daily specials on my Facebook group page.
First time tonight!! Enchiladas and nachos were amazing!!
Thank you Angela Garcia! The food was delicious,as always 🌶😋 This is the real deal,people!!
x

Other Food & Beverage in Noblesville (show all)