We are a small farm located near Horseheads, NY. We raise pork and chickens, and grow produce. We also have alpacas for fiber, and several riding horses.

Ponies in the snow

With this nasty weather the horses are happy to have their blankets. I didn't have any small enough for the pony, so I had to do some shopping this morning. Pippa also got a new blanket, due to destroying her old one earlier this week. Hopefully it holds up to her antics.

Nothing quite like new snow to make animals and children want to play. Stay safe and warm out there today!

Work on a farm is 24/7/365. We have to work with the seasons, on mother nature's schedule. Time is more valuable than gold some days, and hay is like money in the bank. For us it means late nights in the barn when most people are siting in front of a TV or already asleep. Especially while working full time jobs and running multiple other businesses. We are so lucky to have an awesome barn community who help us step away for a weekend to visit family!

This happened today. The old truck had some struggles, and the Subaru didn't fit our family needs anymore. Now we have a multi use vehicle that will service the farm and fit the family comfortably. The F250 still has a job, but has been downgraded from travel to local farm use only.

Our egg laying chicks made it through the first night home. Day old Barred Rocks and Saphire Gems. Next week we get the meat chicks.

Cleaning up the areana. 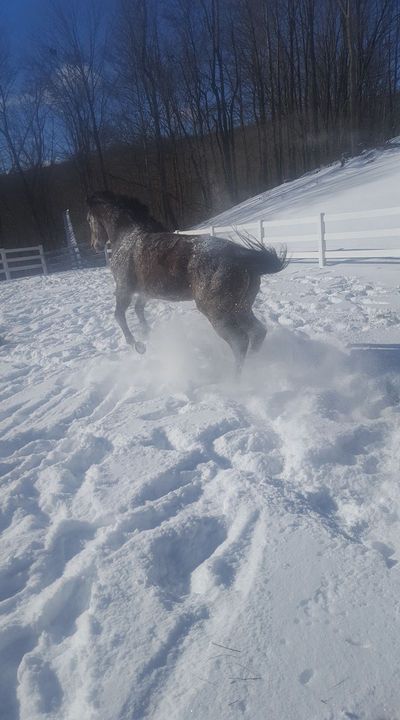 Kicking up her heels in the snow.

Last week we took a trip over the hill for a lesson. Bailey was a champ.

Silently watching me as I finish up the barn. The lighting today is just perfect for pictures.

It might be a little muddy, but she needed to be worked

While Amos cleaned her stall, Momma Pig had some freedom.

Free advice is probably worth somewhat less than what you pay to get it, but here goes anyway---

At some point, if you live long enough, you will pass through the decade of your twenties. And in that time you will probably be PHYSICALLY about as good as you will ever be, in many ways. (My 20s decade was the 1960s)

That comes later, your true riding peak, when your education and control over your emotions starts to catch up with your physical capabilities, and it can last a long time, if you keep fit, and reasonably injury free, well into your fifties, even into your sixties.

So, now the accompanying bit of advice about being "20 something" is to use this decade to try all kinds of things with horses, because you can. Jump, race, play polo, trail ride, ride in dressage shows, hunter classes, don't be a "One Lick Louis" who self restricts to some tiny segment of the big world of horses.

Be brave in your 20s, because you will inevitably, at some point, begin to "shrink" later, and then you can't go back.

There's a saying that "Boldness has genius, power and magic in it," and it's in your twenties that most are the most physically bold, so go do those things now, so that later you don't look back and say, "If only---"

Momma pig move inside for a little while 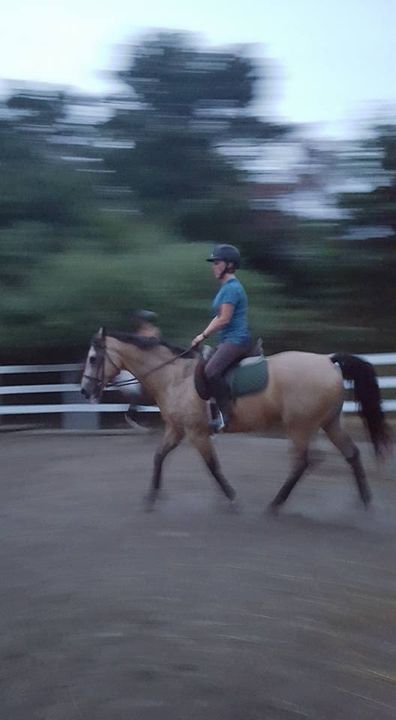 Our first hayfield has been cut.

Wednesday is our farmers market debut in Watkins Glen. Come see what we have to offer! 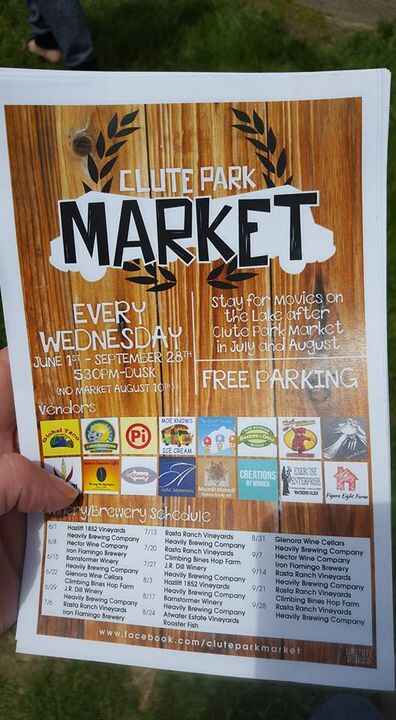 We will be at the Clute Park Farmers Market in Watkins Glen every Wednesday starting June 1st. Come find us! 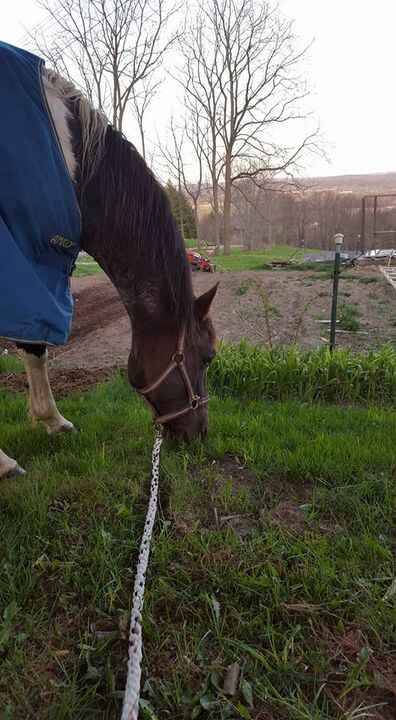 While Amos planted in the garden I gave the pony a bath. Afterward Chico helped mow the lawn while he dried off.

It's certainly spring time here. Everyone is enjoying the fresh green grass and sunshine.

It was a productive morning. The vet came out to give shots and draw Coggins on the horses and Jasper. Bailey got worked, and now all horses are blowing off steam in the big pasture. Wednesday we've got the Farrier coming to put shoes on Roy. It's always busy in the spring.

This little guy is looking for a rider. He is avaliable for on farm lease to the right person. He stands at 14.1 hh and would be best suited for a child or small adult.

It was a little chilly, but still a good day to do a little schooling.

We took the horses out for a little ride this evening. It was too gorgeous not to. Shadow is improving, slow and steady.

Took advantage of this gorgeous weather to get 5 lbs of garlic in the ground. Its late but it'll grow.

It's the Winter Solstice today, and even with the limited amount of daylight our hens are still producing eggs like crazy. The horses are feeling good, and put on a show this morning when I let them out. They are starting to look a little woolly, but don't have thick winter coats yet. All except the donkey. He has become fluffy and even more adorable. Our garden still has the last bit of broccoli holding out. As we round out 2015 I can only hope to continue to grow and enjoy the life we lead on our little farm. A day on the farm

Today, I sat a moment on the hillside among the Napa Cabbage, some of the last vegetables to produce in the garden. The sun washed over me and all was calm. I looked over the garden that although it was fraught with weeds this summer, I can still claim it as a success. The 2 rows of potatoes turned up 20 pounds. The half pound of garlic seed turned into 3 pounds of fresh, most of which will go back in the ground. The row of Blue Hopi Corn returned to me enough seed to grow 4 rows next year. A row of snow peas made it to the table for many meals and left me with seed for next year. 20 broccoli seedlings turned up over 5#s so far. Hopefully I can get a row cover over it this week to keep the broccolini growing into winter. The 8 kale seedling beside the broccoli managed to survive the summer to yield a few pounds of nutrient rich leaves this fall ( a pound is going into Cheesy Riders kale soup this week). The red cabbage struggled to survive the continual attack by slugs to give us a few small heads. Then there is the Napa cabbage I now sat with. 12 plants shining in the sun. They sat almost dormant all summer, nestled in with the snow pea vines. Now that the cool weather has rolled in bright green plants are really growing. It is nice to see this life even as we button up for that winter blanket of snow.

Today was productive day here on the farm. Plowed the old garden under and readied the garlic beds to plant tomorrow. Moved the two pigs we had in the barn out to their pasture. Ran the horses up to the top pasture for the afternoon as the lower is all but depleted of fodder. Also reworked the gravel on our driveway to increase drainage and aid in winter access. With my folks down for the holiday they got us stocked with a bunch of wood in the basement and dad helped me cut a tree down in the back yard. Sent some garlic and Blue Hopi corn seed home with the folks for some homesteaders up North.T'was a busy weekend but there are always rewarding moments on the farm.

Still a lot to do on the farm before winter. Thanks for reading, Amos.

Pig fencing for the next batch.

Be the first to know and let us send you an email when Figure Eight Farm posts news and promotions. Your email address will not be used for any other purpose, and you can unsubscribe at any time. 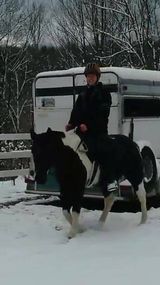 Chico and Kalle messing around this afternoon.