Mike's Seafood offers Fresh and Cooked Seafood Platters, Party Trays and more to Takeout at the Jersey Shore. Call the Sea Isle City Market at 609-263-3458 to place your order!

Call ahead for Fresh and Cooked Take-Out from the Market
VISA, Mastercard, Accepted.

Catch of the Day! Mike's Seafood Proudly Serves Local Ludlam Oysters on the Half Shell! Join us for Lunch or Dinner on the Dock today!
www.mikesseafood.com

Our Dock Restaurant will Reopen This Thursday for Lunch and Dinner 12-9pm!

FREE MUSSELS MONDAY IS BACK!! Starting at 4pm, Dock Restaurant only! Serving dinner to 9:30pm!!

Today, We Salute Our American Patriots!! Remembering all those who served to hold our flag high this Memorial Day!!

Mike's Dock Proudly Serves local Ludlam Oysters on the Half Shell! Come Down and Enjoy Lunch or Dinner with the View!!

Fresh Catch of Lobsters have Hit the Dock!! 🦞 Come Enjoy Lunch or Dinner - Try 'em steamed with corn and potatoes, stuffed with crabmeat or check out The Mighty Macs - a whole lobster, stuffed with our homemade Mac 'n Cheese!!

Fire up the Grill! 🔥 Stop by and pick up your fresh Tuna, Salmon or Sword for Grilling from Mike's Market! Open 9am-9pm all weekend!

Kick off Summer with a Great Deal at Mike's!! Buy 25 Steamed Clams in our house white sauce, get 25 FREE! Dine-in, only! Serving dinner until 9:30pm! Come check out the view!!
www.mikesseafood.com

Why Cook??? Let the Crew at Mike's Cook for You, so you can Entertain! We're Fully Stocked for the Weekend!!

Enjoy Lunch or Dinner at Mike's Seafood and Dock Restaurant and Celebrate our 111 Year Family Tradition at the Jersey Shore! Come see where it all began!!
www.mikesseafood.com
#eatatmikes #wherethelocalsgo

Get your Holiday Weekend Party Trays from Mike's!! Call for same day orders before 2pm!! Menu online at https://www.mikesseafood.com/party-tray-menu

Mike's Dock Restaurant is Open for Dinner Tonight!! Come Down to the Bay and Enjoy the View! www.mikesseafood.com

Mike's is OPEN! Enjoy Lobster, Pastas and Grilled Fish at the Dock Restaurant for Lunch or Dinner today!!

It’s crab ball season at Mike’s! Stop by and get some this weekend!

We're back!! Mike's Seafood Market is open 9am-8pm! Stop by and check out our Takeout Specials this weekend! Specials valid May 20-22, 2022 for takeout only. www.mikesseafood.com

The weekend is here and so are Mike's Takeout Market Specials!! Valid May 20-22, 2022, takeout only! Full takeout menu available at www.mikesseafood.com

It's going to be a gorgeous weekend and lucky for you, Mike's Dock Restaurant is Open Friday, Saturday and Sunday 12pm-9pm! Stop by and have Lunch or Dinner with us!! Don't miss our Friday Special for May 20, dock restaurant only. www.mikesseafood.com
#eatatmikes #exploreseaisle

We sure missed you!!!! What an incredible opening night!!! See you tomorrow at Mike's Dock Restaurant!! Open 12pm-8pm on Sunday, May 15 with abbreviated menu. Check out our Oyster Special, Dock Restaurant Only. #eatatmikes

We're back!! Join us today for opening weekend at Mike's Dock Restaurant! Open Saturday 12pm-9pm with an abbreviated menu and our Opening Weekend Saturday Special!!

A mother's love is more beautiful than anything in this world! Celebrating all moms today!! Happy Mother's Day from the Crew at Mike's Seafood!!

In need of a last minute gift idea for Mom? Mike's has gift certificates!! Stop by and pick one up today! Open for takeout! www.mikesseafood.com

Give Mom a Taste of the Sea Isle City with Gift Certificates from Mike's Seafood! Stop by to pick one up this weekend! www.mikesseafood.com

Be the first to know and let us send you an email when Mike's Seafood posts news and promotions. Your email address will not be used for any other purpose, and you can unsubscribe at any time.

Send a message to Mike's Seafood: 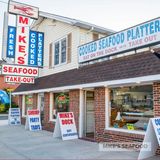 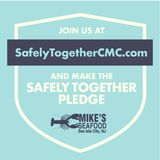 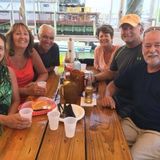 In 1911, Lodovico (Dewey) and his wife Rosina Monachetti made the brave decision to leave their beautiful native land, the island of Ischia, off the coast of Naples, Italy. They set out on a journey for a new and better life in America. Their trip across the Atlantic Ocean was in a rickety, old ship that leaked and could barely stay afloat. When they arrived in New York Harbor, they immediately followed other immigrants to Ellis Island where they filed to become U.S. Citizens. After this long and wearisome trip, they made their way to a train station. When Lodovico and Rosina went up to the window to purchase train tickets, this was another difficult time because the Monachetti could not speak English. When the ticket master asked them what destination, it was at this time he realized the Monachetti could not understand him or English. The ticket master, now with hand gestures, asked "North or South?" With south being the second word he said, Lodovico and Rosina then looked at each other and replied at the same time, "South!" Lodovico then pulled out all the money in his pocket showing where their money could take them, which ended up being Sea Isle City. Once at the train station in Sea Isle City, Lodovico and Rosina were met with much resentment and discrimination. They were told, "You Italians go down to the Back Bay area, which was nothing more than a bunch of run down shacks. MIKE'S now stands on the property where Lodovico and Rosina originally bought the land for just $500. You can frequently hear Third Generation Mike telling the same story up front in the Seafood Market. At the conclusion of the story, Mike likes to say that he wishes he could have the chance to thank the people who sent his grandparents to the Back Bay area (which is currently the Restaurant and Marina District) because it is the most sought out Restaurant and Fresh & Cooked Seafood Market in Sea Isle City and the Jersey Shore. It is common to hear Mike say with a chuckle,"If my grandparents would have just said 'North' Mike's would have ended up in the Hamptons!" For more information visit: Mikesseafood.com

Thank you to Mike of Mike's Seafood for trusting us with protecting his business from floods and ensuring it will be readily available after a storm to continue serving his community!
Check out the installation video for our Mike's Seafood project in Sea Isle, NJ. Mike is at ease knowing he won't have to replace any expensive equipment again or close his doors for too long due to a major flood event. Is your small business protected against flooding? Learn more about Flex-Cover®: https://loom.ly/GtXSRHg
EVERYONE, OUR FRIENDS AT Mike's Seafood in Sea Isle City have made it to the finals again this year!!! Please help us and vote as often as you can for them! "Please Vote Everyday For The Next 10 DAYS In All 3 Categories. We REALLY need your help to become THE BEST IN SOUTH JERSEY!!! THANK YOU, MIKE" BEST SEAFOOD RESTAURANT https://bit.ly/3gXBQEz BEST WATERFRONT DINING https://bit.ly/3yJnwWd BEST CRABCAKE https://bit.ly/2WHdoRe
Green Legion Radio is on Fox Sports The Gambler from 1PM to 3PM coming to you from Mike's Seafood in Sea Isle City! The full squad Hollis Kewlmf Thomas, Quimby, Diaz, Sackmaster, Producer / Sales Guy / Slash @Kyle Nunnamaker & Super Samantha Ross takes a look at who's up and who's down in #Eagles Training Camp, the #Phillies big weekend series vs the LOLMETS, and MORE! Available WORLDWIDE 🌎📲 on the iHeartRadio mobile app OR Stream: foxphlgambler.com #FlyEaglesFly #GreenLegion #TheGambler
Green Legion Radio is back TONIGHT on location at Mike's Seafood in Sea Isle City, NJ!! We'll have the full squad of Hollis Kewlmf Thomas, Quimby, Diaz, Sackmaster, Sales Guy Slash The Gobbler Kyle Nunnamaker and Super Samantha Ross outside the patio at Mike's talking Birds Training Camp, the Phillies playoff push, and more! Come enjoy the BEST seafood down the shore at Mike's and hang with us! If you can't make it, follow us on YouTube! Kickoff is 6PM! YouTube.com/TheGreenLegion #FlyEaglesFly #greenlegion #seaislecity
We're heading to the shore! If you're in Sea Isle City, Avalon, or anywhere down the shore, next Thursday's (Aug. 5th) Green Legion Radio will be broadcast from longtime Friends Of The Program, Mike's Seafood! Show will start at 6PM, so come early and stay late and enjoy the BEST seafood in all of South Jersey! See you next week! www.mikesseafood.com/home
If you're looking for excellent seafood, head down the shore to Mike's Seafood in Ocean City. The best part? They serve Kelchner's on the side to compete your dish! #downtheshore #summer #seashore #seafood #Kelchners
Great food. Great service. 🤙
Mike's Seafood is the perfect place to enjoy a variety of fresh seafood! Grab takeout from the market or dine with family and friends on the dock! #exploreseaisle
Tis the season for summer at the seashore! Spend time down the shore, and make sure to stop at Mike's Seafood and enjoy dinner on the dock. We love supporting local - especially when they serve seafood with Kelchner's! :) #DownTheShore #ProudlyServingKelchners
Specials this weekend?
Will the Friday Lobster special begin this Friday or next Friday?