Rancho Guejito grows organic citrus, avocados, and grapes. It is also a working cattle ranch for grass-fed, Black Angus cattle. Not open to the public.

Visit www.ranchoguejitovineyard.com for information about the winery and tasting room.

Registration open now for the The Ride at the Rancho at Rancho Guejito on March 16, 2019.

Our farming and cattle operation entrance to the ranch is closed to the public unless specified for special events; however, our Rancho Guejito Vineyard Tasting Room is open to the public every Sunday. It features hayride tours, live music, yard games, and our all-natural wines. Located off of the 78 in San Pasqual Valley. Get directions and hours here: https://www.ranchoguejitovineyard.com/Visit-Us 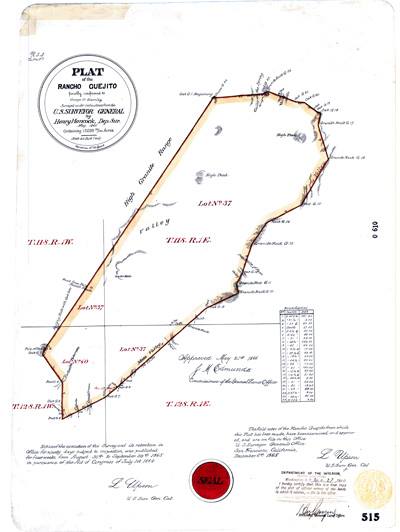 Welcome to Rancho Guejito, est. 1845. Rancho Guejito is an organic farm and cattle ranch that was originally granted to Jose Orozco by Mexican Provincial Governor Pio Pico. Since then, the ranch has grown from approx. 13,000 to over 23,000 acres. Learn more: https://www.ranchoguejitovineyard.com/About-Us/Our-History

This entrance is not open to the public and has no access to Rancho Guejito Vineyard. See www.ranchoguejitovineyard.com for directions.

Be the first to know and let us send you an email when Rancho Guejito posts news and promotions. Your email address will not be used for any other purpose, and you can unsubscribe at any time.

The Wild West: A Brief History of Rancho Guejito

The property was a gift from the Mexican Governor of California, Pio Pico, who had handed out similar vast parcels to other friends and patrons. It was one of 800 so-called Mexican Land Grant ranches awarded during a romantic period of history known as the “Days of the Dons”. Orozco named the place Rancho Guejito.

Untouched by time, the property has been described as a ranch “that cattlemen see only in their dreams” and a place “where the old west is alive and well.” A rancher who ran cattle on the site for decades declared, “This is where the asphalt ends and the Old West begins.”

The ranch has grown over the years from its original historic size of 13,298 acres to approximately 23,000. The largest single addition came in 1940 when the adjoining Vineyard Ranch at 4,500 acres was annexed to Guejito. The most recent acquisition was the purchase of the equally historic 100-acre Rockwood Ranch in 2006, which is now the location for Rancho Guejito Winery.

Other Farms in Valley Center