Plan your Thanksgiving.
Come visit us.

Beautiful mornings. Early start to the Farmers Markets. Come visit us at these markets.

Busy day at Dump station 2. Our snow finally melted and the sweet sap is flowing.
💧 🍁 👍

We sample every batch of maple syrup made. Is it Golden, Amber,or Dark? 🍁

You can always find McCamus Maple Syrup at Suntree Natural Foods Marketplace in Port Hope. Such a lovely store. So nice to see you today.
Stay Sweet🍁 Get Your Fresh McCamus Maple Syrup! Place your order at mccamusmaplesyrup.com

Get Outside!
McCamus Family Ski ⛷ 🎿

Happy Valentine’s Day. We hope you have a sweet day❤️

We are looking forward to the 2022 Maple Syrup Season🍁

Beautiful Day at Mel Lastman Square. Come visit us and pick up your McCamus Maple Syrup at the North York Farmers Market.

Enjoy this sweet treat. Pick up McCamus Maple Syrup with the other lovely fruits and vegetables at the Nathan Phillips Square Farmers Market.

Can you find the gold at the end of the rainbow 🌈. Beautiful rainbow on our farm last night.

Be the first to know and let us send you an email when McCamus at the Market posts news and promotions. Your email address will not be used for any other purpose, and you can unsubscribe at any time.

Send a message to McCamus at the Market: 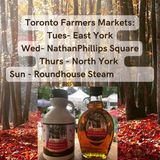 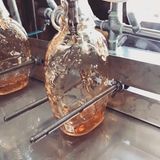 Robert McCamus first emigrated from Cavan County, Ireland and settled in the Township of Cavan, Ontario in 1820.

The tradition carries on with pride by the whole family, with the majority work shouldered by Robert, Harry, and Robert W. with their children and grandchildren at their feet.

All of our maple syrup and maple products are made of 100% PURE Ontario Maple Syrup. We gather the sap from our pesticide, herbicide, and fertilizer free old growth maple forest. Our tapping practices are sustainable! We tap our trees with the smallest and least invasive tap hole in the industry. We tap trees that are only 12 " or greater in diameter.

We collect our sap with a food grade pipeline system. This enables us to gather and process sap runs in a timely manner. The pipeline also creates an environment that has minimal impact on the forest ecosystems, creating less traffic on the forest floor.

Our sap is then processed into maple syrup using an environmentally friendly high efficiency wood evaporator. The majority of the wood we burn is gathered from the forest floor which is a carbon neutral practice. This is provided through the forests natural life cycle. All the pans and equipment we use in our operation are stainless steel and lead free, qualified for food production.

Once the maple syrup is boiled to the correct density, it is filtered using natural cloth filters, then bottled at 180F or hotter which ensures a stable high quality product until opened by the consumer.

Other Food & Beverage in Millbrook

Other Food & Beverage in Millbrook (show all)