Black Forest Equestrian Center, Inc. is one of the South's foremost equestrian centers. Established in 1986, Black Forest provides horse boarding and other equestrian services at its 500 acres location on Banks Mill Road in Aiken, SC.

Such a clear and good reminder!

The Business of Boarding

Shows how expensive it is to run a boarding stable in central KY and expenses are MUCH higher in Aiken. Plus left out a few things like property tax and workers comp insurance but is very good information for boarders.

We hear it all of the time: “I don’t make any money off of boarding, its a business of love.” And we as the boarders shake our heads in frustration, wondering how our hard earned …

I highly, highly recommend Lou's hay crew (LB Performance Horses, Louis Thomas Berizzi) if any one needs hay moved or unloaded. They went above and beyond to get our hay unloaded in several difficult locations and in some cases they ended up handling it twice. They were all extremely nice, did not charge extra for all the additional work and even stopped and helped one of my boarders get his car started.

Soooo glad I wasn’t piloting on this occasion 🙊🙈😂😂 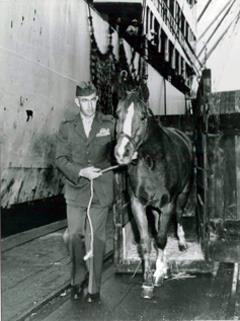 There are times in life when reading about courage from a horse will touch you to your soul. This story touched us like that and we wanted to share with you.

Life Magazine named the filly in the photo as one of the Top 100 Heroes in American History.

She was a former Korean race horse who was purchased by a Marine at a Seoul race track in 1953 for $250, and she served in the Korean War with such distinction she was awarded the rank of Staff
Sergeant USMC. Her name would become SSgt Reckless.

One of her battles….the Battle of Vegas was hopeless. Chinese troops outnumbered the 2nd Battalion of the 5th Marines by ten to one. It seemed there was no chance for a victory other than to withdraw the Marines and regroup for a counter attack, but the troops at Vegas were nearly cut off. Escape was almost impossible.

The Battalion determined the best tactic for escape was to protect the movements of the Marines with cover fire, and a heavy “wall of fire” was to be provided by launching continuous rounds from recoilless rifles…otherwise known as reckless rifles. High ground was chosen for the gun placements, but the needed ammunition was heavy. The rugged winding trails leading to their placements were 45 degrees up-hill. Supplying ammo would be difficult, but constant re-arming of the guns was needed in order for the plan to succeed. The “wall of fire” could not stop until the Marines were safe.

Reckless had been trained to supply these “reckless rifles” on the front lines with ammo while avoiding enemy fire as much as possible. Her learning had been swift, and she did her task without assistance from a human.

The battle lasted for five days. In one 24 hour period alone, while under heavy fire, the little sorrel mare made over fifty trips up the rugged winding trails of the forty-five degree hill. On that day she traveled over 35 miles, and carried more than 4 tons of ammo to the gun emplacements with no human assistance. She stopped only once: to put herself between three trapped Marines and enemy fire while “shielding” them to safety. Twice wounded, she was undaunted. She knew the importance of her task, and every Marine in the Battalion knew it, too. They gave her water and food, and cleaned blood from her eyes as she passed them by.
.

In the end the plan worked, and constant fire never ceased. The fire curtain held, and protected the Marines as they regrouped, and then re-took the territory. The battle was won.

At the end of the battle, Sgt Reckless was given a rub down and special treats. She drank water, beer, and soda from the helmets of grateful Marines. The next day she awoke with lameness. She walked around constantly until the limp went away. After she “shook it off,” she returned to the munitions depot on her own accord….ready to carry ammo up the hill again. It’s what she wanted to do. There would be other battles to fight….this had been just one of many.

On November 10, 1960 she was given the rank of Staff Sergeant, USMC in a ceremony held for her at her Camp Pendleton, Ca. home. In attendance at the ceremony were her comrades in arms from Korea, her two foals whom she had given to the United States Marines and Marine Corp Commandant Gen Randolph Pate whom had fought side by side with her in Korea. Gen. Pate personally presented the stripes to her.

What a great idea to have a lifelike photo on the back of horse trailers! Maybe this will make the drivers around them more careful??

Jenny is single and enjoys long walks in the park. 🐎

The second she realized who was in the truck, she burst into tears. 😭

I've been using this product for years it's absolutely the only thing that helps with gnat allergies. If you have horses that rub their manes, tails or midlines, this product will completely fix the problem as long as it's applied daily. I even dilute it with 6 to 8 parts water and use it in a spray...

Best foal video! If you're a horse person your eyes may be a little bit watery toward the end❤️  

This video is about Dona Serra Day 3

Would this help your riders? :)

With the ever changing situation surrounding Covid-19, we realize many fewer people might be out and about where they can pick up our paper in the coming weeks. We are hard at work on the April-May issue, and we hope everyone gets a chance to read it, either online or by getting a physical paper.

To make it easier for our readers who might be limiting their travels outside the home, we have decided to offer free delivery of our April-May and June-July issues. We will be mailing the papers out shortly after they print -- they might take a little extra time to get to you, but you will get your own copy without having to leave your home. If you would like to continue subscribing for the rest of the year, the cost is $24 for the year, and your paid subscription will start with the August-September issue. Email us and we will send you a link to pay online, or you may send us a check to P.O. Box 332, Montmorenci, SC 29839.

If you want to read the paper right away we will still be distributing it in various places, depending on what is open in a couple of weeks, and we will be purchasing some outdoor boxes that will be placed downtown so you don't have to go into any businesses to pick up your copy. And of course, the paper will also be available as a digital edition online.

Email us today to get on the list! We need your name and address by April 1 in order to send you your free copy.

We hope everyone in our readership is healthy and safe and all your horses are doing well.

Kathy and Donneur wining the I1 Musical Freestyle with a 71.9%. 

This is "CATHY LEWIS DONNEUR" by Del Greenwell on Vimeo, the home for high quality videos and the people who love them.

When Husbands Help at the Barn

Urge Congress to End the Abusive Practice of Soring Horses

True horse lovers or animal lovers should take a minute to do this for these wonderful creatures who give us so much. Please...

What You Can Do Please contact your senators and representative via AWI’s Compassion Index and urge them to cosponsor the PAST Act (H.R. 693/S. 1007), using the form below.

Congratulations to Kathy Lewis and Donnur winning the PSG and FEI High Score at Stablview this weekend!

Fun and beautiful day with my Black Forest family at the Aiken Steeplechase!

Please take 5 minutes to complete this survey, the results may provide Aiken and indeed South Carolina with enormous benefits, including funding opportunities

Laura Graves and Verdades are No. 1 in the world, according to the latest rankings released Monday that confirmed the pair as the first American to achieve the top ranking.

Lisa L. Crowther had her best ride to date today! Hard work is paying off and they are now Qualified for championships! I’m so proud!!!

Congratulations to Kathy Lewis on her I-1 win with Donnur with a 71% to get them AA high point and FEI high point!

Congratulations to my girl Sophie Miller and Weissage on her first PSG win with 68%. And to her new Silver Metal!!! I’m so proud🤩

Kathy Lewis in the I-1 freestyle after winning the PSG today at Stableveiw.

I-1 Musical Freestyle, 1st place, 70% StableView show. So thankful for my horse of a lifetime, Donneur. And for my dear friend and world class trainer Shawna L Harding! Thank you Donna Dring for making this great video!

Be the first to know and let us send you an email when Black Forest Equestrian Center, Inc. posts news and promotions. Your email address will not be used for any other purpose, and you can unsubscribe at any time.

Had a great weekend at the Conyers show! Donneur was so fun and even though he had some excess exuberance and a few mistakes, we won our 4th 3 class and are now qualified for the regional championships! My wonderful mare Weissage handled the scary venue perfectly and we won the Prix St George with a 69%! Thank you to Shawna Harding, super trainer and instructor, for bringing us from babies, just under saddle to now!

Other Farms in Aiken