Enjoy flights, pints, hiking and picnics on 90 acres of wildlife protected forest located on Big Cobbler Mountain, 45 miles West of D.C. Open year-round for visitors to enjoy each season on the mountain. As the scenery changes, the menu changes ... including Summertime seasonals of Ginger Peach, Wild Blackberry Hop and Smackin' Orange.

Enjoy flights, pints, hiking and picnics on 90 acres of wildlife protected forest located on Big Cobbler Mountain, 45 miles West of D.C. Open year-round for visitors to enjoy each season on the mountain. As the scenery changes, the menu changes ... including Summertime seasonals of Ginger Peach, Wild Blackberry Hop and Smackin' Orange.

This Saturday, May 21st come on downtown for the Wine & Craft Festival! Food, entertainment, crafters, and so much wine!

Check out the link below for info and tickets.

Not into wine and more of a beer person? Stop by our brewpub on Main Street for a pint or some 4pks to-go.

It’s ALWAYS Earth Day on Cobbler Mountain… remember to keep those cartons out of the landfill. When you bring yours back to re-use and re-stock with four new bottles we pour you a PINT on the HOUSE. Go green and celebrate the earth with us over and over so we leave behind this beauty for the next generation and many more.

Forks and Corks and . . . Whiskey?? YEP! We'll be at Blacksburg Fork and Cork this Saturday at Smithfield Plantation. Got your tickets? See you there. Need a ticket? Go here - https://www.freshtix.com/events/12th-annual-blacksburg-fork-cork-2022

We'll be on site pouring samples and selling bottles. See you there - it's gonna be a PERFECT day!!

See you out here!!

WINCHESTER — Get ready to "Uncork the Bloom."

Join us in the Burg this weekend!

Experience the quintessential Virginia wine tasting and enjoy Virginia ’s finest vintage wines, a craft beer garden, the brand new distillery den, live music, and MORE. Join us and raise a glass as we navigate the Virginia Wine Trail, taking a pit stop at the best wineries in Virginia. Gather your...

Cobbler Mountain Cellars updated their info in the about section.

Cobbler Mountain Cellars updated their info in the about section.

Information Systems Manager to Cider Producer ….. Cutest sailor ever!!! Jeff and his sister, Dawn, after returning from training (circa 1989/90 ) while sharing his brave smile. Plus, port shenanigans along the way!
Still sportin’ the same golden smile… and always taking time to laugh!

Hampton, VA…..
Coming your way and looking for volunteers!

Get OUTSIDE this weekend to enjoy the leaves exploding with color, the campfires & Smack That Butt BBQ this Saturday 11-5pm (or until
sold out!)

Visit our friends @ CapitalAleHouse Fairfax to enjoy a variety of Cobbler Mountain Cider on tap…. Traditional Jeffersonian, Mountain Top Hop & Mango Lemonade are all there now!

Come out to Cobbler Mountain Cider this weekend and try our new styles available on tap! Talk of the Mountain shrimp and crab cakes on site Saturday and Sunday afternoon.

Talk of the Mountain Seafood is here until 5p.m. Grab some for dinner tonight!

Originally thought we’d release Labor Day weekend, but we are AHEAD of schedule with a sneak peek happening this weekend! Place your orders now for the first batch hitting the taps (for pints & growlers) and the shelves (for take-home packs & cases).

Our new neighbor, that purchased the cattle farm across from us, has a menagerie of feathered livestock….. including one wild & crazy peacock. He apparently got loose in May and wandered the whole stretch of territory with sightings from neighbors happening in a ten mile radius. He spent many afternoons down by our creek, so we couldn’t resist including him on this label!! Thank you, Preston, for keeping us entertained & connected!!!

Come join and celebrate with us at Cobbler Mountain Cider 10th Year Anniversary!

Live music starts at 5pm. Food trucks serving at 11am.

Check out our latest draft menu! Come and see us this weekend. Saturday and Sunday 11-5pm!

Village Events – Events for all tastes and seasons

Yorktown Fest happening today with two sessions! Look for Jeff & Anne heading this one up along the beautiful bay!

Tickets go on sale April 1st @ 8am. There are a limited amount of tickets per event shift. Click here for more information and to purchase tickets.

Gorgeous day to be outside for this 2-day event! Join Chuck, Sue & Phillip in Orange County today & tomorrow!

Enjoy tastings, reserved group tours, picnics, reserved hiking & camping (via www.hipcamp.com) on 90 acres of wildlife protected forest located on Big Cobbler Mountain, just 45 miles West of D.C. Open year-round for visitors to enjoy each season on the mountain. As the scenery changes, the menu changes ... including Summertime seasonals of Ginger Peach, Wild Blackberry Hop, Cherry Tart, Pomegranate Black Currant and Smackin' Orange. Winter's favorites start in the Fall with Harvest Pumpkin before Halloween and keep us warm with Maple Stout and Jammin' Cranberry Ginger to celebrate the holidays, crackling fires and the winter wonderland of the mountain. Year-round, enjoy the classic Traditional Jeffersonian, Original Honey, Mountain Top Hop and our Kickin' Cinnamon! Visiting Hints: Call or message ahead to confirm the week's hours. Year-round, best catching us by appt. on Thursday, Friday & Monday. Saturday Walk-Ins 11:00 a.m. - 5:00 p.m. / Sunday 12:30 - 5:00 p.m. Plus, May - October, Saturday 11:00 a.m. - 6:00 p.m. Enjoy extra sunshine enjoyment, unless an event is scheduled. Walk-in Tastings available prior to last 15 minutes of the day! Groups 6+ by bookings via: Message or email. Additional times by reservation. Venue space available for private parties, corporate events and all sorts of special occasions including the Treehouse Loft for casual gatherings and the Medieval Barrel Dining Hall for sit-down seated occasions in our original Celtic, English, Italian and French chairs and tables circa 1840. Let us know how we can help you plan your special occasion! Mannered pets and children welcome. Distributed in retailers near you in DC, VA, MD, & WVA. Residential and business shipping available via UPS by special request. From Highway 66, exit 27 and follow state signs. [email protected] www.cobblermountain.com Follow us for the latest on FaceBook, Twitter & Untappd. Fun, friendly, passionate growers work all week long on their farm residence to share their favorite pastime & interests with friends old & new. Come join in the fun!

Be the first to know and let us send you an email when Cobbler Mountain Cellars posts news and promotions. Your email address will not be used for any other purpose, and you can unsubscribe at any time. 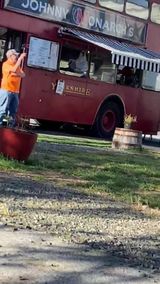 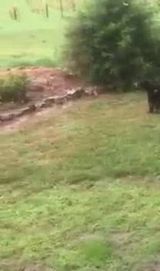 This little guy visited us tonight! That makes 3 for the bear inventory on our side of the mountain this summer. (If all the other sightings have been of the same two). We'll call this one Lil' Hop!

Brought his companion today to audition for the new cider labels! Pig Iron 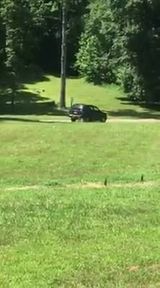 Sorry little fella to interrupt your apple-picking...Jeff had to drive by Pig [email protected] 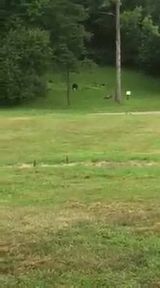 Daily bear sightings this summer. This guy was snacking on apples near the forest entry, when sounds of a vehicle sent him [email protected] Pig Iron

Two black bears roaming for apples near the forest entrance in the morning (view from house desk window). Wish I'd captured the "standing and picking apple trick" that caught my eye! Afterwards, they loped into the cooler foliage towards the old spring for a sip. Same day at dusk, two deer appeared and also STOOD UP for apple picking! Word must've gotten out about them old cider apples! #vacider #cobblermountain #blackbears

Cobbler Mountain peeps---All are welcome to play in the snow and get bottles to go today but---CYA---4WDrive only and bring a shovel just in case. LOL.

Part Two: Snow cloud coming across the mountain...complete white out over the peak!

So, at the tail end of Saturday night, with mounds of dirty dishes in the sink...this one pulled me outta the kitchen and onto the steps to watch and listen to the magic Mark Clay and Ted Seely were creating out front with our Olivia. It erased all aching backs and burning feet and made my heart and mind spin. Wow, guys, wow! I love the ditty on the guitar that makes my toes tap. Thank you for this. xxoo

Olivia stepped up to the mike today with Ted Seely and Mark Clay! (first time).

Cobbler Mountain Cellars Big Cobbler Mountain Delaplane, VA Jeff and Laura have restored the 90-acre property once purchased in 1959 by Laura's father for $100 an acre. Here is what led them here....

Lawrence Daniel McCarthy was a writer for the Associated Press after serving in the U.S. Coastguard. Living on a houseboat in the harbor, he was longing to have land around him and teach in the countryside. He found the farm... which reminded him of his County Cork, Ireland heritage... made a handshake deal with the gentleman farmer and got a teaching job in Marshall at the brick school (now the library). He became known as an activist for students with special needs. In 1967, he was asked to direct a facility in South Carolina. The job took Laura's parents away from the farm with plans to be back in three years. Once there, he was immediately driven to write a grant over the first year, seeking $1M funding from the government to build a state-of the art facility. After sending the proposal off, he did not sit still. One evening he and several recruited community members integrated the two schools, in preparation for all receive the benefits ahead. It was the peak of riot season, in the deep South, with a outgoing lad leading everyone. He was on a mission...which was cut short. One morning, Mr. McCarthy fell ill at school. He died that day of cardiac arrest at only 42. Over breakfast, he had told Laura's mother that he still felt, " He hadn't done enough". Little did he know... She got the news shortly after that the one million dollar grant HAD been awarded for the new facility. She also got news that Laura was on the way.

Mrs. McCarthy saw through the groundbreaking and then moved to the state's capital of Columbia to graduate school, all while taking care of her infant daughter and older toddler daughter. She raised the girls on her own, all while holding on to the land in Virginia to one day pass along to them. For forty years, she covered the taxes and checked on the farm during summer visits to see the Irish clan in the Metropolitan areas. Laura became attached to the beautiful mountain, the pastures, the four seasons and the wildlife. It was a dreamy notion to live here one day.

Laura met Jeff, a Cleveland, OH, native while he was serving in the Navy in SC. When they were first married, he created batches of handcrafted wines and ciders....while eventually took over the entire house, the garage, the basement, the pantry, the kitchen constantly....until she suggested he see the land where the could create a lifestyle and he would have MUCH MORE ROOM!

Cobbler Mountain~ Home to the "Little Winery That Could"~ is where the fairies live in big poplar trees, children run barefoot to Thumb Run Creek and stories of the wise Grandfathers and kind Grandmothers are shared around the Grand Fire Circle at the foot of the forest. A legendary dreamer, Grandfather McCarthy, discovered Big Cobbler Mountain in 1959. His love of creatures and exploring has been preserved and passed down to his children and grandchildren. Come hike a wooded trail. Open a bottle of imagination. Sip handcrafted wines with the makers. Find a little fantasy under the old apple tree. Who knows who you will meet along the way?

Other Farms in Delaplane