There is no better feeling then having your kids work alongside you and having the same passion you do!

Thanks to Barbland and White Eagle Dairy for sharing this photo!

The cow's owners were initially only expecting one calf until an ultrasound by their primary care veterinarian revealed there were twins. When the cow went into labor, the owners could feel the tail of a calf, meaning the calf was coming out backward in a breech position. That's when they decided to bring her to Ohio State. When Ohio State veterinarians Michelle Carman and Joe Lozier examined her, they were able to correct and pull the first calf as well as the second calf. When checking for any trauma to the uterus and birth canal, the presence of another calf was identified. Sure enough, there were triplets! All three were females and all 47 lbs. They all remarkably have similar color patterns.

According to Dr. Jeffrey Lakritz and Dr. Marco Coutinho da Silva, since the cow was implanted with one embryo but she actually delivered triplets, this suggests the embryo split twice which is rare. Triplets are uncommon compared to twins and further diagnostics are needed to confirm they were identical.

Don't get any sweeter than this Brown Swiss lady ❤

The new Swiss cross beauty to the farm ❤

Update: Sold out ♥️ Deliveries will be going out this weekend!

Cows are calving again....which means milk back in the tank :) Lotions, soaps, and farm fresh butter and milk available again :) I will post prices and pictures alittle later.....and maybe a give away....stay tuned :)

Farm fresh milk, will deliver or meet for delivery...$6.00 a gallon 😄 Thanks in advance for supporting local farmers :)

I know it's not your typical farm name, but just like everything, there is a story behind it :) In high school, I was always responsible for the evening milkings, and I was running behind coming home from school one afternoon, so my grandmother who used to help me, called me and asked "is anyone milking on Slacker Hill today?" And that farm name stuck with us :) we have been milking for 24 years and have been "Slacker Hill" for 16 years :)

Be the first to know and let us send you an email when Slacker Hill Dairy posts news and promotions. Your email address will not be used for any other purpose, and you can unsubscribe at any time. 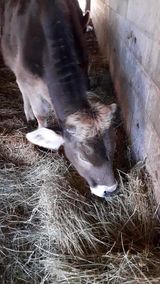 Other Farms in Limestone