We are only a short twenty minute drive from either the towns of Fredericksburg, Culpepper, and Orange, Virginia.

Thanksgiving treats for the horses!

IS PATTING REWARDING TO THE HORSE?

We often see riders slapping their horse on the neck enthusiastically at the end of a showjumping round or dressage test. Patting is considered by many to be a way of telling the horse that they have performed well – but is this the reward we think it is, or could it cause them discomfort?

Horses are extremely sensitive to touch and many riders use different pressures ranging from a light pat to a slap. To find out more about how horses feel about this, a team of equine scientists at Nottingham Trent University set out to investigate the eﬀects of patting and wither scratching horses when ridden or being handled.

For the first part of the study, footage of 16 competitors in the dressage Grand Prix at the 2012 London Olympics was analysed to see how and when the riders patted their horses, and how they reacted.

Fifteen riders patted their horses, with 12 continuing to do so for over a minute. A signiﬁcant percentage of these pats resulted in the horse reacting. Most commonly, the horses accelerated – sometimes they changed gait from walk to trot. This could indicate that the horses found the patting unpleasant, or that they took the opportunity to accelerate because the rider dropped the rein contact and/or leant forward.

In a second part to the study, a group of ﬁve well-handled riding school ponies and ﬁve relatively un-touched rescue horses were patted or scratched four times, for 30 seconds at a time. The study was ﬁlmed and the horses’ behavioural responses were noted.

Patting resulted in little behavioural reaction. However, wither scratching seemed to be much more eﬀective as a reward to the horse. Some lowered their heads, moved their upper lips and tried to mutually groom the handler – all responses similar to those seen in positive horse-to-horse interaction.

The researchers concluded that riders and handlers should be encouraged to scratch rather than pat their horse as a reward.

Previous research has shown that scratching the withers consistently lowers the horse's heart rate and can therefore be a useful aid to calm them in anxious situations. Wither scratching may also improve the horse/human relationship as mutual grooming does between horses. Somehow we have gone from near 80s a week ago to a forecast of 16 degrees tomorrow morning so I spent the afternoon getting the stalls ready. To a horse owner this is a sight of beauty. :)

Since the horses don't eat pumpkin pie, this will just have to do. Happy Thanksgiving!

What make life on a horse farm relaxing is knowing that horses take pleasure in the simple things in life... like some fresh apples with dinner. :)

Just in case you need horse sounds while riding your bike...

cody getting on sheila

Waiting on our babies! I'll try and get a photo of the newborns when they hatch!

Evening on the farm...

Moon while feeding the horses tonight... 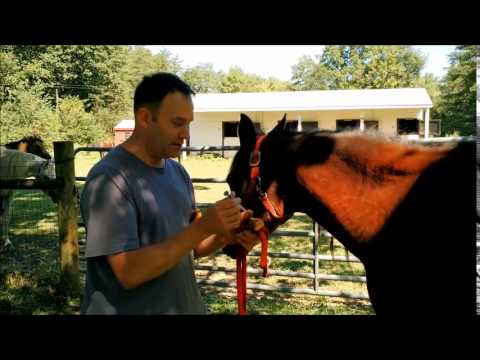 Giving a shot to Talia

Evening on the farm...

Did somebody say BREAKFAST! :)

Just another day on the farm...

A little crack and boom headed this way!

Today's project which took five hours start to finish... repair the chicken coop floor. Many of you know I use a 100+ year old two seat outhouse as a chicken coop (I converted it a number of years ago by adding a new door and a chicken door and ramp). This Winter we noticed one side of the floor sinking. Tristan and I had no idea what to expect... we started our exploratory surgery on the floor. As luck would have it, they built this old outhouse with a cement foundation. The beams had merely rotted away. We put new beams, sub-floor, and clean shavings... job complete!

Morning on the farm...

Flashback: Fredericksburg police officer was saddled to a job he loved

A little history on the farm next door...

Plenty of kids growing up in the 20th century believed Richmond was the place Santa went when he came to town.

Spring is in the air and the horses are feeling it!

Got to get boy his exercise on the farm one way or another...

Be the first to know and let us send you an email when Copper Leaf Acres Arabian Horse Farm posts news and promotions. Your email address will not be used for any other purpose, and you can unsubscribe at any time.

Other Farms in Locust Grove

Making sure the animals enjoy Thanksgiving!
First annual "Rolling Thunder on the Farm"

Other Farms in Locust Grove (show all)