Horse Boarding. Self board, partial board, full board. All disciplines welcome. We also offer riding lessons, pony parties, horse camp & overnight board.

Raintree Equestrian is a family oriented full service horse boarding facility with a relaxed atmosphere. Equestrians of all ages, skill levels, and disciplines are welcome. We offer self, partial, & full board, lessons & training. We offer riding lessons for english, hunter/jumpers, barrels, western pleasure, and basic beginner lessons. We also have all discipline horse shows on site. Call or come by to visit! Happy Thanksgiving everyone! We certainly have so much to be thankful for.

Calling all friends who are self-employed/run their own business, or want to support small businesses!
It's interesting to see the variety in our extended circles.
Post a link to your website below without a description - just the link, it speaks for itself.
Anyone who follows me can see it and visit your site.
Copy this text onto your own page and give others the chance to reach more people through your circle.
Visibility is everything!
Let's help each other!

PUBLIC SERVICE ANNOUCEMENT:
I've been very busy the last few days with trying to save a horse that got bit in the nose by a RATTLESNAKE. (I've not been trying to ignore anyone.)
For those of you that live in an area where there are venomous snakes.... Listen up......
If a horse gets bit in the leg.... it's Bad... but, if they get bit in the face, especially the nose... it's Life Threatening, and can be Deadly... FAST!
The nose swells up, the nostrils close up, and the horse will SUFFOCATE! A horse must breathe through his nostrils. They Can't breathe through their mouth.
I didn't see this horse get bit by the rattlesnake... but, when I found the horse, he was suffocating! I knew what must have happened.... and I knew what I had to do, and do it FAST! I had to get Air to my horse!
The nostrils were so tightly closed... the only tubes I could fit up his nostrils were the size of a pencil, which sure didn't give him much Air..... but, it was enough to keep him from dying. After he could get a Little Air.... he quit thrashing around so bad, and he was not in as much of a Panic. Then, I prepared some lengths of garden hose to put in his nostrils. I tried to trim the edges so they wouldn't be as rough... because I knew is was going to be tough to get them in place. A frightened horse in a lot of pain doesn't want anyone to touch him, much less push a lubricated garden hose up his nose, when there is barely enough room for a pencil.
By this time, I had him in the stocks to minimize his movement so I could try to get him more air.
I slid the water hose along side the tiny hose, and although I made him bleed... I knew I had to get him more air. After both bigger hoses were in place... he was frantically trying to breathe deeper, and the pain from putting the tubes in made him breathe heavier and it was still hard to breathe through the larger hoses..... but, at least he could breathe. The hoses are held in place with tape, but putting tape on a painfully swollen face has it's own set of challenges.
Once I knew he was getting air... the next step was getting veterinary help.

Well, this happened Saturday, and around here... the vet was closed.
A visitor to the ranch that drove up for her appointment ... arrived as the tubes were put in the nose. She called her friend in Texas, who was a Vet, and after the vet confirmed we already had tubes in his nose.... she told me the horse needed Dex, Banamine, and Pen G. I had several things on hand, so I did what I could do for him with what I had.... but, still needed to get my local vet here...

Many phone calls later, and leaving messages, and eventually reaching the Mother of one of the vets... I found out that everyone was out of town, but should be back later that night.

My horse's face was swelling even more, and he was becoming unrecognizable. (Photo from when tubes were put in) He swelled to twice that size at his worst.
When a horse has been bit by a venomous snake, it is critical to keep the horse calm and as quiet possible. I kept him in the stocks with a fan on him.
Note- A horse bitten by a venomous snake, should NEVER be sedated.
His lips, mouth, and tongue swelled so much that swallowing was impossible. I let him try to lick water from a hose, but he couldn't swallow it. He so wanted to eat and drink, but this was impossible.

Later- the local vet arrived.... and after taking one look at the garden hoses sticking out of the grotesquely deformed face.... he looked at me and said I saved his life by getting the tubes in his nose when I did....
Meds, I.V. Anti-Venom, I.V. fluids, and Antibiotics were given. The road to recovery had begun.
I stayed with my horse most of the night, keeping him calm, and quiet.
The licking of water seemed to keep him happy, and was a distraction from being hungry.
Day two- The vets came back for more Anti-Venom, Meds, and I.V. Fluids. The swelling was now improving some...
Now on our 3rd day.... the swelling has improved enough that the nasal tubes have been removed, and although breathing is still far from normal... he can breathe without the tubes.
His upper lip and muzzle are still extremely swollen, but he can drink from a tub now, and I.V. fluids are no longer needed.

Eating is difficult, and water soaked alfalfa pellets (Mush) can be licked up. Eating will take a back seat to fluids for now.

He will have to be on Antibiotics for an extended time, because Snakes carry large amounts of bacteria in their mouth/fangs and this can be fatal.

I hope none of you reading this post ever have to experience what I've been through the last few days. But, I hope this information was helpful, and that if you or someone you know has a horse bitten by a venomous snake in the face.... you will know what to do until the vet can help.
Please Share to reach others that may benefit from this information. If one horse is saved.... it is worth it.

We are looking to hire a full time stable hand. Must have experience working with horses. Duties will include feeding morning and afternoons, turning horses out to pasture and bringing them in, cleaning 20-25 stalls daily, cleaning water buckets daily, and blowing hallways daily. Other responsibilities include keeping feed and hay bales stocked daily, cleaning and filling 2 water troughs in the pastures, and taking trash out. Serious inquiries only and please only contact us if you have experience and a good work ethic. Pays $650 per week. Need someone five days a week. MUST be dependable and thorough.
Please contact through messenger. Thank you!

We are looking to hire a stable hand. Must have experience working with horses. Duties will include feeding morning and afternoon, turning horses out to pasture and bringing them in.
It should take 2 hours in the morning beginning at 7:30 and 2 hours in the afternoon beginning at 3:30. Serious inquiries only and please only contact us if you have experience. Pays $50 per day. Need someone five days.
Contact through messenger. Thank you!

We are looking to hire a stable hand. Must have experience working with horses. Duties will include feeding morning and afternoon, turning horses out to pasture and bringing them in, cleaning stalls and water buckets, blowing hallways, unloading feed and light maintenance. Serious inquiries only and please only contact us if you have experience. Pays $100 per day. Need someone Fridays and Saturdays.
Contact through messenger. Thank you!

We are looking to hire a stable hand. Must have experience working with horses. Duties will include feeding morning and afternoon, turning horses out to pasture and bringing them in, cleaning stalls and water buckets, blowing hallways, unloading feed and light maintenance. Serious inquiries only and please only contact us if you have experience. Pays $100 per day. Need someone Fridays and Saturdays.
Contact through messenger. Thank you!

We are looking to hire a stable hand. Must have experience working with horses. Duties will include feeding morning and afternoon, turning horses out to pasture and bringing them in, cleaning stalls and water buckets, blowing hallways, unloading feed and light maintenance. Serious inquiries only and please only contact us if you have experience. Pays $100 per day.
Contact through messenger. Thank you!

Be the first to know and let us send you an email when Raintree Equestrian Center posts news and promotions. Your email address will not be used for any other purpose, and you can unsubscribe at any time. 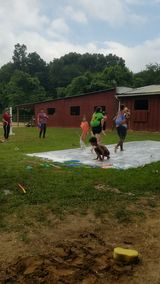 Raintree Equestrian Center is a family oriented full service horse boarding facility with a relaxed atmosphere. Equestrians of all ages, skill levels, and disciplines are welcome. We offer self, partial, & full board, lessons & training. We teach english and western riding lessons and basic beginner lessons. You can bring your family and friends to Raintree for a fun pony party or send your kids to summer horse camp for a week. We also offer horses for sale and for lease. Overnight boarding is available so please call in advance to book your stalls. Call or come by to visit!

Other Farms in Olive Branch

Shadowfax's first ride with Ricardo. She started training with him one year ago (with zero prior training) and has become an amazing companion. Thank you Ricardo and Raintree staff for helping our baby reach her potential with gentle, compassionate training.
https://www.facebook.com/groups/1019817818375439/permalink/1423569758000241/
LOVE this place! Best people, best lessons...just the BEST!
Welcome baby Joker. Born on April Fools day.
Radley loves Karma and his lessons with her!