This page is all about food. We are interested in your recipes, favorite restaurants and meals, food stories, etc. One thing we all have in common is the need for food.

It gives us energy, comforts us, and makes us happy. We are excited to have you here! This page is not an official page of The Church of Jesus Christ of Latter-day Saints. All opinions, posts, comments, and other information are the individual views of those involved; not representative of the Church.

Anybody want a loaf of homemade wheat bread? I have a couple of extra…
🍞🍞🍞🍞
 

Three things I learned tonight by having our full-time missionaries over:
1. They continue to be outstanding young men. 😇😇😇
2. If you order Café Rio through Uber Eats when the missionaries first show up, it will be delivered right when you’re finishing, then they can take it with them. (That’s within the rules.) 🌮🥗🧋
3. Once they get home and have dinner, their life is pure bliss.  🤟🤟🤟
Food. The Universal Language.

This is what happens when you give cupcakes out to the other people on your floor. Lots of fun! 🧁 

You won’t go wrong if you give out Georgetown Cupcakes to your neighbors! That’s because food is a universal language.
Tonight I gave them to three more neighbors along with a small note that has my name, phone and apartment number on it. I just told them to let me know if they need anything. 
Of the eight neighbors I have here on my floor, I’ve now given food to—and personally met--seven of them. (The eighth guy had the music up so loud in his apartment I don’t think he could hear the doorbell ring, even though I tried three times tonight!) 🧁🧁🧁😎
#FeedMySheep #georgetowncupcakes
 

I bought a dozen St. Patrick’s Day Georgetown Cupcakes today and started passing them out to my friends at the Montgomery County Scrapyard.  This lady is a gem! She gives me Spanish lessons every time I cross the scales. Food is the universal language…  🍀 🧁

This Wednesday is St. Patrick’s Day. It’s a great day to make some frosted sugar cookies and take them to your neighbors. Yum 😋🍀🍪

Food is a universal language. Tonight my friend Jose came over and made me an authentic Costa Rican national dish. It’s called Gallo Pinto.
He took the leftovers and made me a wonderful black bean soup too.  Enjoy the photos. Message me if you’d like the recipe!
  

From Elder Jackson Solomon, (Bethesda North Elders):
"Today I wanted to share some thoughts I had about the way we congregate together in wards. Getting to meet so many different members of the Church while serving a mission has made me realize something: everyone is different and as such has different skills and talents to bring to the table.
The members of a ward are like the ingredients in a cookie. Sure, all are good separately--peanut butter is good, sugar is good, flour is good--but when you put them together they make something really amazing!
I truly believe that the Lord in his infinite wisdom understood how this applies to us as well. He knew that each of us, while alright on our own, are capable of something much greater when we work together with others who share our same faith and convictions.
I invite everyone who wants to witness this for themselves to come visit the Bethesda Ward and see all of the different people who come together to progress the work of the Lord and uplift each other in such a fantastic way! Being a part of this ward for the last 5 months has helped me come closer to Heavenly Father and the amazing members here make me proud to be called a member of The Church of Jesus Christ of Latter-day Saints (Mormon)!"
Enjoy this peanut butter cookie recipe!

Well, less than 24 hours after delivering cookies to four of my neighbors, look what I found under my door! Very nice people! I just made two new friends.
👨👩🏻‍🦱
  #letsdosupper 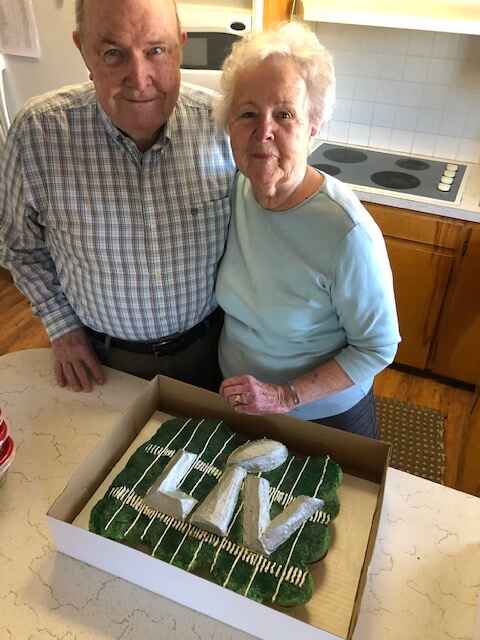 Friends of the Bethesda Ward-Let's Do Supper updated their information in their About section.

Friends of the Bethesda Ward-Let's Do Supper updated their information in their About section.

It started about a year ago when I bought some Nestle Toll House Pumpkin Spice Truffles on sale. I thought a couple of times that I should make some cookies with them, but it called for a can of Libby's Pure Pumpkin, which I didn't have. Nor have I bought any since.
So, when I got the urge to make cookies tonight, the missing pumpkin ingredient slipped my mind until I was half-way through the recipe.
Alas, I had an old jar of pumpkin BUTTER in the fridge, still good, but only about 1/8 of a cup at best. I needed 3/4 cup. Back to the fridge.
There was a half-used container of orange frosting from a cupcake adventure from a few months ago. Not pumpkin flavored, but orange. Like pumpkins. Kind of had the texture I was looking for too, so I went with it.
About 30 minutes later I had a batch of pumpkin truffle cookies made. And it was Valentine's Day. Unable to quickly whip out perfect sugar cookies with red frosting and sprinkles, I went with what I had. Besides, they were good. I ate about 4 of them quickly.
But this page isn't about feeding ourselves, it's about feeding others. I live in an apartment complex. There are 8 other apartments on my floor. I've never taken anything to any of the other occupants in five years. That would change tonight.
I had 29 cookies left. I had some transparent dinner-sized plastic plates in the cupboards that have been there for a while. I also have tinfoil. I printed off a quick greeting to put on the plates and cut them out in the shape of a valentine. I had enough cookies for four plates. I was getting excited.
My first drop-off was to the unit at the west end of the hall. I rang the doorbell. A nice younger lady came to the door. "Hi. I'm your neighbor down the hall. I made some Valentine's Day cookies and I've been giving them out to people on the floor. These are for you." "That's very sweet," she said with a big smile. "Thank you." Given that she had a bathrobe wrapped around her shorts and t-shirt, I didn't stay long.
Next, I came out with plate #2. A guy was standing outside the apartment at the opposite end of the hallway. He had about 8 ski parkas with him. "Are you coming or going?" I asked.
"Just got home from snowboarding," he said. "Cool!" I replied. "I've made some cookies for Valentine's Day. Would you like a plate?" "Sure!" he responded. "I'm Bill!" My enthusiasm for giving out the cookies was quickly surpassed by his enthusiasm to introduce himself. He'd been to Whitetail. I asked if he needed any assistance with the jackets. He said he was good. Bill is a friend now.
Next, I went across the hallway. A well-dressed young lady with a black mask answered. The room was darker inside and lots of candles were burning. I didn't want to interrupt anything. She enjoyed taking the cookies and told me how sweet it was that I would do that. She seemed to be doing Valentine's Day just right.
Finally, I took a plate to the folks next door. A stout young man came to the door and started to chuckle when I told him what was going on. "That's very cool!" he said. "Great idea for a Valentine's Day!" So I made friends with the guy next door. (That's kind of important because sometimes they talk kind of loud over there...)
Food is a common language. Everybody speaks it. It brings joy to people. And it brings more joy to the people who give it away.
Do you have a food story, favorite recipe, great restaurant, etc. that you would like to tell us about? We'd like to hear it.
And remember, they won't care if the cookies aren't red and shaped in the shape of a heart. It's the thought that counts...!
#letsdosupper

Be the first to know and let us send you an email when Friends of the Bethesda Ward-Let's Do Supper posts news and promotions. Your email address will not be used for any other purpose, and you can unsubscribe at any time.

Other Food & Beverage in Potomac

Apple chips Ingredients: - Two apples (or more, depending on how much you want) - Cinnamon sugar (for dipping, 2tbsp of sugar for every 1tsp of cinnamon, and each measurements per apple.). Prep: - Preheat oven to 250°F. - Line a cookie sheet with wax paper (Wax paper for better results, or grease pan). Instructions: - Cut apple into thin slices. (Use best judges on how thin. Any apple could give up to 32 slices give or take.) - Dip the thin slices into the cinnamon sugar mix. - Line them on the wax paper. For best results, separate them best you can. - When the cookie sheet is full, put it in the oven for 30 minutes. - Take out of the oven, flip the apples, then put it back in for another 30 minutes. - Enjoy!