We are a full service equine facility in Temecula, California. We offer training, lessons, mare and foal care, breeding and can host special events.

Owned and operated by Robb and Betsy Wallen, Wallen West is a professionally run facility specializing in training both horse and rider to excel to the top of their abilities. For over 20 years, Wallen West has produced champion horses and riders in many breeds and disciplines. Whether you wish to compete in the show ring, or ride for pleasure, Wallen West can help you reach your goals. We are ded

Owned and operated by Robb and Betsy Wallen, Wallen West is a professionally run facility specializing in training both horse and rider to excel to the top of their abilities. For over 20 years, Wallen West has produced champion horses and riders in many breeds and disciplines. Whether you wish to compete in the show ring, or ride for pleasure, Wallen West can help you reach your goals. We are ded

Check this out . …This is Ayva, one of our riders who was featured in her town’s online news spot.
Way to go Ayva ! 👏👏💕😊

We look forward to seeing you both soon. It is going to be a great week!💕😊

Horses make EVERY day a good day. And Brenda Paauwe-Navori shares 'What Clicks' for her in our client photo-submission series. She writes:

“One of the most successful young ASB hunter pleasure horses on the circuit. ‘Crème Filling’ also has been described by many as one of the most beautiful as well. This is a recent shot from the Spring 2020 Carousel Charity Horse Show in Scottsdale, Arizona.” 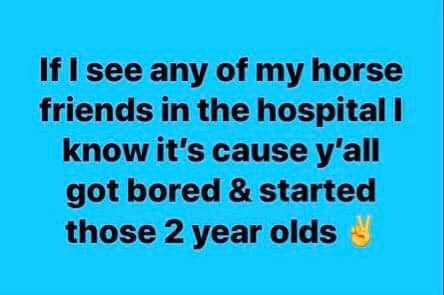 ASHA on the Road at ASAC, 2020 Youth Conference Sold Out + More

Saddlebred Strong: ASHA Youth Anna Christy - an equestrian at Wallen West Farms - please keep her in your prayers and positive thoughts. ASHA Weekly eNews has her story below.

ASHA on the Road at ASAC, 2020 Youth Conference Sold Out + More

Merry Christmas to all and to all a good nite! #teamwallenwest #asbdreams #hackney #saddlebreds #merrychristmas2019

Wishing a Blessed, Safe, and Joyous Holiday Season from all of us at Wallen West Farms!

The UPHA National Conference is only 5 weeks away. Here are a few of the highlights, from what promises to be a fantastic week!
Go to : uphaonline.com to register.

Out of the 5 horses who played the iconic "Black Beauty" only one is still alive. He's healthy and recently celebrated a milestone birthday.

Saddle up your child to strengthen their smarts. A study by Mitsuaki Ohta, a professor at the Tokyo University of Agriculture, proves that memory, learning, and

Good Luck to our dynamic duos from Wallen West Farms & Riding Academy as they journey to the American Royal! Best of Luck to all exhibitors showing!
#asbdreams #saddlebreds #teamwallenwest #barnfamily #uphaamericanroyal

Wallen West wishes everyone Good Luck at Morgan Grand Nationals! To join in the excitement from home go to www.MGNLive.com ! Tonight Ayva Palos and Playmor All Night GCH are in class 320 in the Performance Arena. “A great horse will change your life. The truly special ones define it...”-Anonymous

Be the first to know and let us send you an email when Wallen West Farms and Riding Academy posts news and promotions. Your email address will not be used for any other purpose, and you can unsubscribe at any time.

Send a message to Wallen West Farms and Riding Academy:

Other Farms in Temecula

https://richfieldvideoarchive.vhx.tv/carousel-charity-horse-show/season:1/videos/cc22-class-28-blue-ridge-billy-robb-wallen-up
Are u going to Louisville?
Just wanted to let you know that I will be in Louisville across the street from the Crown Plaza H.
We love our Wallen West Family! We are so blessed!
Welcome to 'Pinch'!
You can obtain a copy of “The Fighting Breed”, the new documentary on Morgans in the Civil War by ordering the film at: http://www.morgandocumentary.com Two years in the making, this video “The Fighting Breed” tells of the accomplishments and tribulations of the Morgan horse in the Civil War. From su***de cavalry charges to dangerous raids deep behind enemy lines, The First Vermont Cavalry and their prized Morgan horses turned the tide of the Civil War. An untold story of sacrifice and courage. View the trailer below. Please like this and share with your friends. https://vimeo.com/102930889
Her smile says it all! Kaitlyn Jackson after her win in the Roaster to Bike Class Diamond Jubilee 2015 with Passing Lane...
The dedication Robb Wallen has to his riders to make them better, to make them one is a passion he shows with each interaction. Robb Wallen and Kaitlyn Jackson before the 3 Gaited Junior Exhibitor qualifier at Diamond Jubilee 2015.
Passing Lane and Kaitlyn Jackson Open Roaster to Bike Champions Woodside Horse Show!
Thank you to Robb and Betsy Wallen for picking not one but two amazing horses for our Daughter Kaitlyn Jackson. Ride with the Best at Wallen West!!
Our fabulous Friesian 4yr old Glyder (Mintse pref x Cabernet ster), beautifully trained by Wallen West! Thank you Mallory for riding a great show season!
Kaitlyn Jackson and Sweet Thunder Road first time showing under the Wallen West banner.