Congratulations to Laura Kraut on being named the 2021 USEF International Equestrian of the year! We are so proud to be a part of her team!! https://www.usef.org/media/press-releases/laura-kraut-hunt-tosh-named-2021-equestrians

St. Bride's Farm updated their information in their About section.

St. Bride's Farm updated their information in their About section.

Good luck to Laura, Baloutinue and the USA team in tomorrow's Team Final!🇺🇸

Looking forward to the Team Qualifier!!

The horses are on their way! We look forward to watching Baloutinue, Laura, and the U.S. team compete!

Congratulations to Laura Kraut riding St. Bride's Farm's Baloutinue on their first win together! We look forward to watching the future success of this great new partnership.

𝐓𝐡𝐨𝐫𝐨𝐮𝐠𝐡𝐛𝐫𝐞𝐝 𝐓𝐲𝐩𝐞
“I’m just absolutely thrilled,” exclaimed Kraut. “What I always loved about him is that he reminds me of a Thoroughbred. He’s got a lot of blood, he is brave, scopey, and has all the best qualities that a Thoroughbred has. He’s just a fast horse. That’s the Thoroughbred type of quality because I didn’t ride a fast round. I did more strides than other people, but he’s just that quick. He lands and he gets away from the jump very, very fast, so I think that was where I got the edge.”

𝐎𝐧𝐞 𝐨𝐟 𝐭𝐡𝐞 𝐁𝐞𝐬𝐭 𝐇𝐨𝐫𝐬𝐞𝐬 𝐢𝐧 𝐭𝐡𝐞 𝐖𝐨𝐫𝐥𝐝
Kraut has been interested in Baloutinue (Balou de Rouet x Landor S) for many years, but never had the chance to buy him, up until April 3, right before Adam Prudent won the $214,000 Wellington Agricultural Services Grand Prix CSI4* with the talented horse. The Prudents approached Kraut to say that they would finally consider selling him.
“I’m fortunate enough to be very good friends with the Prudents,” said Kraut. “Everyone in the world has asked to buy him, including me many years ago. It was a great horse for Adam to have to go to the highest level, which he did and did very well, so when the opportunity presented itself, I was very fortunate to have an owner who was ready to step in and buy him for me. Katie and Henri [Prudent] have the utmost faith in him and think he’s one of the best horses in the world, and so do I. I can’t even believe it; I feel like the luckiest person to have him.”

Welcome to our new filly by Flexible out of Jacquard!

What a future Laura Kraut has with Fleurette! | Winning Round | Longines FEI Jumping World Cup™ NAL

Enjoy watching the Winning Round of the Longines FEI Jumping World Cup™ NAL in Washington DC! The American Show Jumper Laura Kraut just knew what to do: She ...

Congratulations to Laura and Fleurette! A well deserved win - a long time coming.

Did you know why yesterday’s win was extra special? 🥰

This has been a class I've wanted to win for many, many years. I've had quite a few seconds, thirds and fourths, but a win always seemed to elude me. At the beginning of the week, I said, 'This is going to be my week.' I felt good about it.

❤️Thank you to the owners, sponsors and whole team who supports me everyday. This would not have been possible without you all.

Of course, thank you to Fleurette, for her passion and determination 🐎

Thank you for making it a day to remember. 🍀 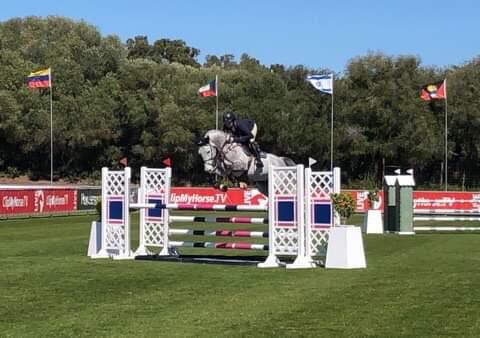 The story behind St. Bride's Farm and its successful partnership with Laura Kraut.

The couple sat down to reflect on their experiences being a NetJets® U.S. Jumping Team horse owner

A beautiful clear second round for St. Bride's Confu and Laura Kraut and a bronze medal for the NetJets USA Jumping Team in the Longines FEI Global Nations Cup at the Palm Beach Masters - congratulations!

Very proud of Jakarta's performance in today's $210,000 LONGINES Grand Prix of the Palm Beach Masters. As always, thank you to St. Bride's Farm for the ride on this talented mare!

Looking forward to the weekend and representing the NetJets USA Jumping Team in the LONGINES FEI Jumping Nations Cup™ USA CSIO5*! Come out to Deeridge Farms to cheer us on, Sunday, Feb. 17, at 1:30 p.m. EST! 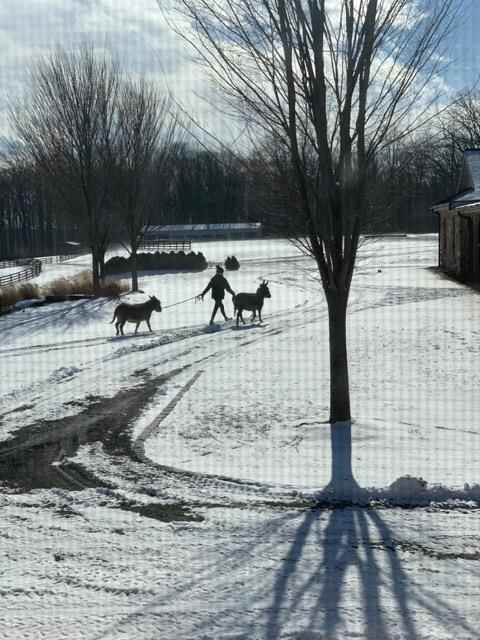 While the St. Bride's show horses were jumping to victory in sunny Wellington, the staff and equines (and donkeys) at the farm were busy weathering Mother Nature's polar vortex!

And we have a new leader in Laura Kraut and Confu, winners of last week’s Grand Prix! Let’s see if anyone can catch their jump off time of 32.304 or if they will once again win here at The Ridge Turf Tour!
.
.
.
pc: RG Photo Equinium Sports Marketing Laura Kraut Prestige Saddles Prestige Italia

Horseman’s Spotlight: Horses Took Dale Hailstones To The Top Of The World

It’s a situation that happens often—a horse-crazy kid has to put his favorite hobby on hold to attend university. That was Dale Hailstones' path. Hailstones, a native of Glasgow, Scotland, studied musical theater in school and received his mas...

St. Bride’s Farm’s resident pony Tinkerbell finished eighth of 31 finalists at the Theodora Randolph North American Field Hunter Championship Finals at Glenwood Park in Middleburg, Va. They were chosen by an international panel of judges from an initial field of 60 horses and riders during a week of hunting in Northern Virginia. Tink and Katy regularly hunt with the Piedmont Fox Hounds and Barb serves on the PFH Board of Directors.
Photo by Joanne Maisano.

After retiring from competition, our jumpers are transitioned into new jobs at the farm. Whether they become broodmares, foxhunters, or pleasure horses (like Ziedento, pictured here), they lead an active and happy life!

What an inspiring video with Laura Kraut and several of her horses including St. Bride's Whitney!

The unbreakable bond... Laura Kraut on why horses are her whole world. If you love horses, you can relate :)

Laura Kraut: Finding Your “Why” & Three More Keys to Mental Success in the Saddle

Read about Laura Kraut's insights on how to successfully perform in the show jumping arena!

A person can spend a lot of time trying to figure out the secret to succeeding in this mentally challenging sport. In Nöelle Floyd and my next book, I’m trying to remedy that situation by going straight to the source: interviewing some of the top-ranked riders in the world to find out what makes ...

Be the first to know and let us send you an email when St. Bride's Farm posts news and promotions. Your email address will not be used for any other purpose, and you can unsubscribe at any time.

Other Farms in Upperville

An exciting evening at the WEF - Winter Equestrian Festival located at Palm Beach International Equestrian Center watching the Horseware Ireland $216,000 CSI4* Grand Prix. Ireland’s Conor Swail was second last to go and took the lead from fellow Irishman Mark McAuley. Last to go was Laura Kraut who put in an amazing round aboard Confu owned by St. Bride's Farm Upperville VA
Piedmont Fox Hounds
Events at the WEF - Winter Equestrian Festival on Saturday, March 19 culminated in the $216,000 Horseware Ireland Grand Prix CSI4* during the “Saturday Night Lights.” WEF 10, also sponsored by Horseware Ireland, is the fourth week of FEI-rated four-star competition hosted throughout the circuit. At the night’s conclusion, Olympic team gold and silver medalist Laura Kraut (USA) took home the top prize with her long-time partner, Confu, owned by St. Bride's Farm. There were 32 entries that participated in the Taylor, Harris Insurance Services Children’s Medal 14 & Under on Saturday in Equine Tack and Nutritionals ring. Of those young riders, only the six with scores of 82 or above would return to test. The top six riders waited in the ring, heard their test, and attempted the test in reverse order of their scores from the first round. Eva Mackenzie on her own Demonia GS Z would be the last to test on her score of 88 and would hold on the top spot to secure the win.

https://www.jenniferwoodmedia.com/triumphant-return-for-confu-and-laura-kraut-in-216000-horseware-ireland-grand-prix-csi4/
The Upperville C**t & Horse Show extends heartfelt CONGRATULATIONS to Upperville's own Barb Roux and Ann Thompson, Team USA, and all their connections on a spectacular performance in Aachen!
Ann Thompson's Balou du Reventon and Barb Roux's Balloutinue were part of the winning Nations Cup Team on Saturday and their successes continued in the Grand Prix of Aachen on Sunday- with Balou du Reventon finishing second and Balloutinue finishing fifth! St. Bride's Farm CHIO Aachen

Tri-County congratulates Laura Kraut Jessica Springsteen Mclain Ward members of the United States Show Jumping team for taking home the silver medal in the Tokyo Olympics 🇺🇸 we would also like to celebrate the horse Baloutinue, owned by Barbara and David Roux of St. Bride's Farm. We are proud to have them as members of our local community!
Congratulations to PFH land owners David and Barbara Roux! Having a hometown connection makes watching Olympic Team Show Jumping even more exciting. St. Bride's Farm Baloutinue and rider Laura Kraut were a part of the 🥈 team! Here in this sweet photo Laura gives Balou a little love for his stellar round and week in Tokyo.

Baloutinue was just purchased last week by Barb and Dave Roux of St. Bride's Farm from Adam James Prudent of Plain Bay Sales LLC. We are excited to watch this new partnership grow 🐴

Photos by Isabel Kurek 📸
Sponsors are critical to the success of independent shows like the Upperville C**t & Horse Show- we would like to extend our thanks and gratitude to St. Bride's Farm for serving as presenting sponsor of America's Oldest Horse Show. Happy New Year to everyone! We look forward to seeing you under the oaks June 7-13, 2021.
[RESULTS] Two 4* shows were on the program this weekend, located at the antipodes of each other. On the one hand Riyadh (Saudi Arabia) for the first World Cup competition of a series that will end next Saturday; on the other, Wellington (USA) and its ESP Holiday II. At the Diriyah Equestrian Festival, after the demonstration of the Frenchman Julien Epaillard in the qualifier for the LONGINES FEI Jumping World Cup Grand Prix (1st and 2nd respectively with the horses belonging to the Hécart family and the Ecurie Chev'el stable), it is finally the Scuderia 1918's chestnut stallion Togabo Z that wins in the major class ridden by Daniel Deusser (GER).

Today took place the 4* Grand Prix in Wellington. 11 combinations started in the jump-off and it's finally...our member Roux' grey Holsteiner who won the biggest ribbon! Congratulations Barbara for this success under St. Bride's Farm's colors! This is the very first international individual victory for Confu, still ridden by Laura Kraut (USA).

Photos : Stephex Stables - Xavier Boudon / Big Bang Marketing.
Laura Kraut with Barb Roux of St. Bride's Farm
Today’s version of life on a farm is very different than 50 years ago. The 60th anniversary of the Hunt Country Stable Tour gave visitors a behind-the-scenes look at equestrian Virginia and a peek at the grandeur of some of the finest equestrian facilities in the world.

Photos by Joanne Maisano Photo.
We are so excited to welcome back Olympic gold medalist Laura Kraut to the show ring at the Upperville C**t & Horse Show after over 40 years! We are looking forward to watching her compete with St. Bride's Farm's Confu and Jakarta! Catch all the action FREE here: https://handctv.com.au/upperville-horse-show-on-hc/
x

Other Farms in Upperville (show all)