Titan enjoying a face brush from student Ali! He is the kindest school horse and loves the attention!

We want to say we will sincerely miss Rosemary Marino Schiavi in my adult groups! A client of many years. She is making a move to Texas. Thank you Rosemary!!! Keep in touch and enjoy your new adventure!

Congratulations to our team members on a successful Virtual AEL Nationals!

Here are the results:

A nice article about the AEL. Nice picture of our team from last year’s National Championships!

JOB ALERT! Verrill Farm Stable is looking for barn help at least 2 full days a week(additional days possible). Must be able to work on Sunday and then either Monday, Tuesday, or Wednesday. Experience preferred but not mandatory. Please contact Alyce McNeil @ 978-808-0839

GOOD NEWS! As of Monday, May 25th Verrill Farm Stable will once again be open for lessons! Please contact Carrie our lesson coordinator to schedule. Due to Covid-19 protocol we are unable to offer beginners at this time. Lesson scheduling contact: [email protected]

Titan is truly enjoying his rehab now that he is back home!!!

More shoppers are heading to their local farmers markets and farm stands to avoid going to grocery stores. Most of these local stores are offering creative pick-up and shopping solutions.

Let’s begin the new year/decade with our comedic school pony Duncan and his pre ride yawns!!

Wishing one of our very best school horses, the one and only Titan a speedy recovery ! Thank you to all of our Verrill Farm Stable customers who helped to contribute to his procedure! We are very grateful!

Very sorry to hear of the passing of Donny Prentiss. Donny and the Concord Independent Battery have been a part of the Verrill Farm Stable family for many years, helping them practice for the Patriots Day Parade in Concord and supplying them with horses. We proudly fly their flag over our barn!!! Donny will be greatly missed, a wonderful man.

Want more Concord news? Sign up for our free weekly newsletter and have it delivered right to your inbox.In 2017, only two years after the Concord

Flynn was enjoying some love today!

The Chronicle Of The Horse

To all of my adult clients! Please take the time to read this article! I absolutely love teaching all of you! We truly have so much fun during our lessons(you all know that Kate has "special Adult rules" during lessons, though the juniors don't think it is fair that these rules do not to apply to them, he he). It is so rewarding having riders restart their riding(some after only a few years and some after a decade or two), also those adults who have the courage to take on a whole new sport and embrace all that it entails. Riding is a sport that has longevity! Age is only a number. I am also very impressed with all of my new adult gentlemen(some are fathers of students and some just wanted to learn to ride) that have taken on this challenge as well(we have really grown this demographic at the farm and are having a blast!!) Thank you to all of my great clients, it truly is a pleasure teaching all of you, it makes me smile!
Kate

"Determination is like facial cartilage—it grows with age. On the negative side, my long nose is longer. But on the positive side, my determination, which started out over-sized, is now in full-blown Jack Russell mode."

Thank you Annie Chase Jones who has been so generous to the farm and has become the “Treat Lady”! It is greatly appreciated!

One glaring weakness in trying to determine who to take lessons from is the almost inevitable tendency most people have to judge someone's ability on what they have done, their visible, public accomplishments, rather than on what they know.

Because a teacher or trainer either has or has not won such and such a thing. You can see that. You can know that.

What is far harder to see is whether someone who has been a winner can teach competently, or whether a rider with fewer visible accolades is actually a more skilled teacher than the more "famous" counterpart.

I remember George Morris talking about a former student as being so talented that it about made the angels weep, but, said George, "He was a terrible teacher. He was so intuitively gifted that he could just do it, but he did not know how he did it, so he could not break the process down into component parts that he could explain to someone else."

After we won the World Championship gold medal back in 1974, we all became in demand for clinics and such. And can't speak for my teammates, but I didn't know my ass from my elbow back then.

I thought I did, because I equated the color of the medal with expertise, but in the many decades since, as I think I have begun to sort it out, I have increasingly realized how little publicity and innate ability can be counted on to mean much, in terms of linking one with the other.

There are top teachers you have never heard of, and famous ones who can't teach, and all sorts of gradations therein, and it is so hard to know which is which.

Summer Camp is off to a great start! The kids and ponies are so excited!

CET was the High Point Champion Team at the Muddy Brook AEL show this past Sunday. Congratulations Team!!!

One of our riders enjoying her time on Sparky, a barn favorite! 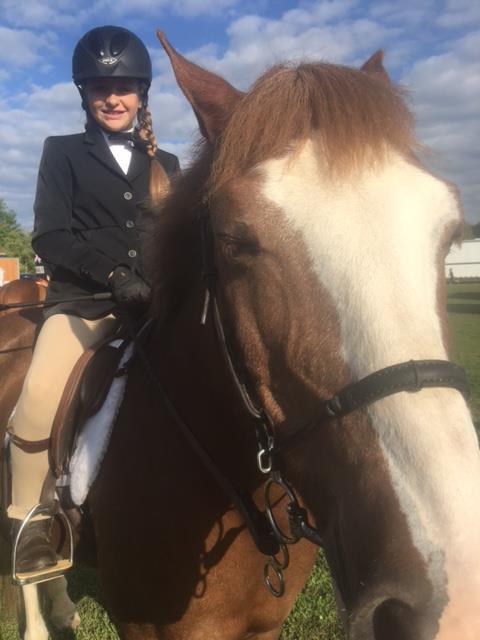 Montrose works to accommodate the competition schedules of special talent athletes. Congrats to Brynn O'Brien '24 who placed first in advanced beginner B for the IEA league. Brynn belongs to the Verril Farm Concord Equestrian Team and has been riding since age 6. Her trusted horse Snickers is a constant companion. #greatathletes

Congrats to our Concord Equestrian Team on being Champion High Point Team at our AEL Show this past Sunday!!!

Come to Verrill Farm Stable this Sunday 10/15 and watch our team compete! If you've never been to an AEL show before, or any show at Verrill Farm, you'll learn so much! And, in addition to the riders and horses, there's a raffle and a concession stand!

Good luck to our AEL athletes at the upcoming Concord Equestrian AEL on 10/15/17!

We're having an August Fun Camp! Check it out! Contact [email protected]

Check out the article about CET in the Concord Patch! https://patch.com/massachusetts/concord/announcements/a/11748/success-for-the-concord-equestrian-team

The Concord Equestrian Team, who rides out of Verrill Farm Stable in Concord, MA, capped off a very successful 2016-2017 season by bringing home...

What a great photo of the 2017 AEL National Champions! So proud of our team!

Some great photos from IEA Nationals! Congrats to all CET members - riders, coaches, parents, helpers and horses! It can't be done without an amazingly supportive TEAM!!!

Be the first to know and let us send you an email when Verrill Farm Stable posts news and promotions. Your email address will not be used for any other purpose, and you can unsubscribe at any time.

Other Farms in Concord